At one of the very first events I attended a kind spirited TO generously slung me some promo cards that he had “in the stash” leftover from earlier events. It was a wonderful gesture and has kept me going back for events & general shopping needs ever since.

One of the cards he gave me caught my eye – ‘Beast – Nefarious Geneticist’. I was reading a lot X-Men comics around the time of “Age of Apocalypse” and have  soft spot for prominent characters of that period. I always wanted to give him a try as a ramp option.

Back then I was too inexperienced at team building and my collection (nor the ranges of sets available) was smaller, but today I was tidying up my messy little deck building area of the house (we’re receiving guests tomorrow and that table is needed for low priority things such as eating like civilised Human beings!) happened across the card and set my mind to building a team around him (instead of finishing the aforementioned tidying up for our visitors)

There’s a few options to get the blocking mechanic in play with a number of cards providing a forced attack situation. ‘Mr Fantastic’, ‘Phoenix’, and ‘Toad’ all immediately spring to mind.

After much deliberation I’ve decided to go for ‘Toad – Mortimer Toynbee’. I like the added damage he gives on his lvl 1 &2 (which will have good synergy with whatever spin down option I adopt for ‘Beast’) and he doesn’t give the option to my opponent as a global. Plus, because I’m a theme guy, I like the idea of him being a villain too.

For the spin down I’ve decided to go for the Basic Action ‘Polymorph’. The global will be handy in a number of instances and has the added bonus of being a potent die purchase too.

Now onto the 2 & 3 cost characters I’m going to grab with ‘Beast’. One character I’ve been keen to play around with is ‘Lyssa Drak – Keeper of the Book of Parallax’. A regular opponent of mine uses her in his ‘Big Entrance’/’Guy Gardner’ build and he really messed me up with her. I like the idea of having a go with her kind of jiggery-pokery to keep my opponent’s bag eternally filled with sidekicks and trapping all of their lovely purchases in the Used Pile. She’s also a Villain and keeps my little affiliated theme intact. 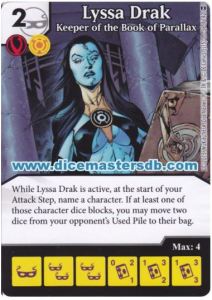 If ‘Lyssa’ is going on the team then I need to control my opponents blocking to maximise my opportunities with – and I’ve just the 2 cost-er for ‘Beast’ synergy in mind: ‘Ultron Drone – 01000100 010001’.  He’s got a half-decent game text for some cheeky removal, but I’m more interested in his Global to force blockers and allow me to guarantee ‘Lyssa’ success.

I really want to keep the control pressure up now, I think, and manipulating my opponents dice seems an interesting play approach I’ve never tried to this point.

To keep the idea going I’m now looking at this guy:

He falls outside of my 2/3 cost limit for my ‘Beast’ synergy, but I can’t resist the tough choices he presents my opponent.

I see the potential for a high pressure scenario to unfold here for my opponent – not only have I just filled your bag with the sidekicks you don’t want, now you need to decide if you’ll only draw 3!

I’m feeling some need for a stronger removal option than the ‘Ultron Drone’s’ capture effect so I’m going for ‘Gamora – Assassin’. I know that I’ll be forcing attacks with my ‘Toad’ so if there’s a tricky character pecking me from my opponent’s side I’ll get them over to face ‘Gamora’. She’s not a villain, but does come at a 3 cost so has the potential to synergise with ‘Beast’ on his burst face.

Looking over the team now to consider how I might fill the last 2 slots and final BAC I feel I may have lost my way a bit. Thinking over my cornerstones of team building I’m missing one key component – a win con.

Now I’ve come completely unstuck. I’ve got this all this interesting control-style tech going on and no source of life drain on my opponent. I need something more offensive to get the damage. I’ve got some mid-level attack strength in the team but no way of driving it through. I do this all the time: get excited about some mechanic and run with it only to realise that, as well as the team is made, I can’t get the kill strikes in.

I consider a small change of direction and switching ‘Toad’ to the ‘Tongue-Lashing’ version, forcing all non-NPCs to attack, adding ‘Jocasta – Patterned After Janet’ for some ping-back damage, but that will take forever to get a kill in if I’m not getting any other damage through. Maybe some Overcrushing muscle like “Carnage – Sinister’? Maybe some direct burn through someone like ‘Deathstroke – Weapons Master’? Maybe I go back and re-think the Villain team? Have I defended myself against my opponent’s Globals & BACs enough myself?

Now I’m all full of doubt, I’m lost in the woods with it. What the hell am I doing with this team? In a matter of minutes I’ve gone from excitement over the build to complete uncertainty if it’s even going anywhere.

So – I’ve done what I always do in these situations – I’ve turned to the community & posted the partial team on Reddit and asked for help. They’re traditionally very good at giving strong, constructive feedback and will help me get my mind back on some sort of track.