Up to last month I had very little “Dungeons & Dragons: Battle for Faerun” in my collection.

All I had was a starter set (for the BACs really) and a handful of cards & dice from participation/prize boosters I’d picked up at some OP events.

But that all changed when 4 or 5 weeks ago or so I bought up all the remaining BFF boosters at one of my FLGS’s and purchased a ticket for a “Faerun Under Siege” Rainbow Draft to get a collection started for that set.

Why? What’s changed? It’s simple really – my love of the game has transcended IP and now it’s about game text and team building variety. I came for the Superheros, now I’m staying for the game.

Actually – technically – the expansion of my collection outside of the Cape stuff happened around Christmas when Father Christmas put a Yu Gi Oh gravity feed in my stocking. However, the motivation here was that I was desperate to get my hands on a rare ‘Blue-Eyed White Dragon’ and a rare ‘Jinzo’, (and thankfully pulled one of each from the feed – Happy Days!) With the expansion of my collection into the D&D sets i am much more driven by having new mechanics & archetypes to play around with that have that distinct D&D flavour.

I haven’t played much with or against these interesting mechanics that have caught my eye. I’ve had plenty of experience playing around with the archetypes of the Marvel & DC sets and want to do the same with D & D. But, I’ve struggling to absorb the cards & make some connections. I think with just a starter set and half a feed of boosters I’m not spotting the synergies and interesting mechanics/combos as I try to read up on the DB the cards I’m yet to acquire.

So – I put a post up on the Reserve Pool and Reddit and asked for some advice on interesting mechanics and FUS drafting respectively. I wanted to do my own investigation & team building so I specifically requested some pointers & broad themes.

Here are some of the key ideas I was given:

This one leapt out at me straight away, especially as the poster in question used the phrase ‘Johnny-swarm’ to describe it. This was exactly the motivation for expanding into the D&D area – to open up team building opportunities and an archetype that brings one of the best of AvX and the best of BFF is going to get my attention. 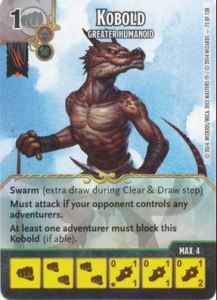 It’s taken a few reads of the rule book but I can most definitely see the potential in it and I finally understand why ‘Kobolds’ were cropping up as a ramp option in teams all over the place. This is certainly a build I’m going to have a go at.

Another eye-catcher because…well… it’s Dragons, innit. Dragons are cool. Michael Le’s team was shared and I took a peek to help understand.

I’m looking at this for some fun – get it together for a casual night for my own enjoyment – but think it’s something I’ll no doubt be playing around with.

This was suggested as a build to look out for on the draft. I get it – with ramp options much more limited in a draft a card with a good fabricate cost (such as the suggested ‘Clay Golem’) can be a very powerful edge to have. Double it up with some swarm advantage and you could be playing some big hitters your opponent couldn’t dream of getting on. I’ll on the lookout for this in tomorrow night’s draft. 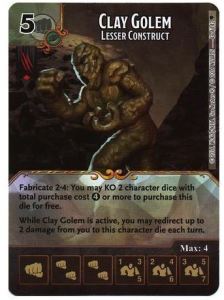 For some constructed fun though, as I type this, I’m getting an idea for the ‘Johnny-Swarm’ concept; fabricate would be great way of getting those cheap swarming characters re-fielded for some ‘Human Torch’ ping. Hmmm…
Invisible Stalker

There was a bit of ‘Invisible Stalker – Greater Elemental’ love knocking around. I had to look it up as, per my request, there was no context; I was just pointed in it’s direction.

I get why some would consider it underrated, but I’m not convinced it has the on-demand utility of a ‘Mera’ global and a ‘Human Paladin’ global. I’ll put some thought into in any case.

So – lot’s to keep me going for now – thanks once again to the diamonds in the community who offered their guidance. I’m looking forward to getting some team building done that has a different tone to it.

What about you? Are you a “Capes only” kind of player or do you appreciate all IPs? Let me know in the comments below…