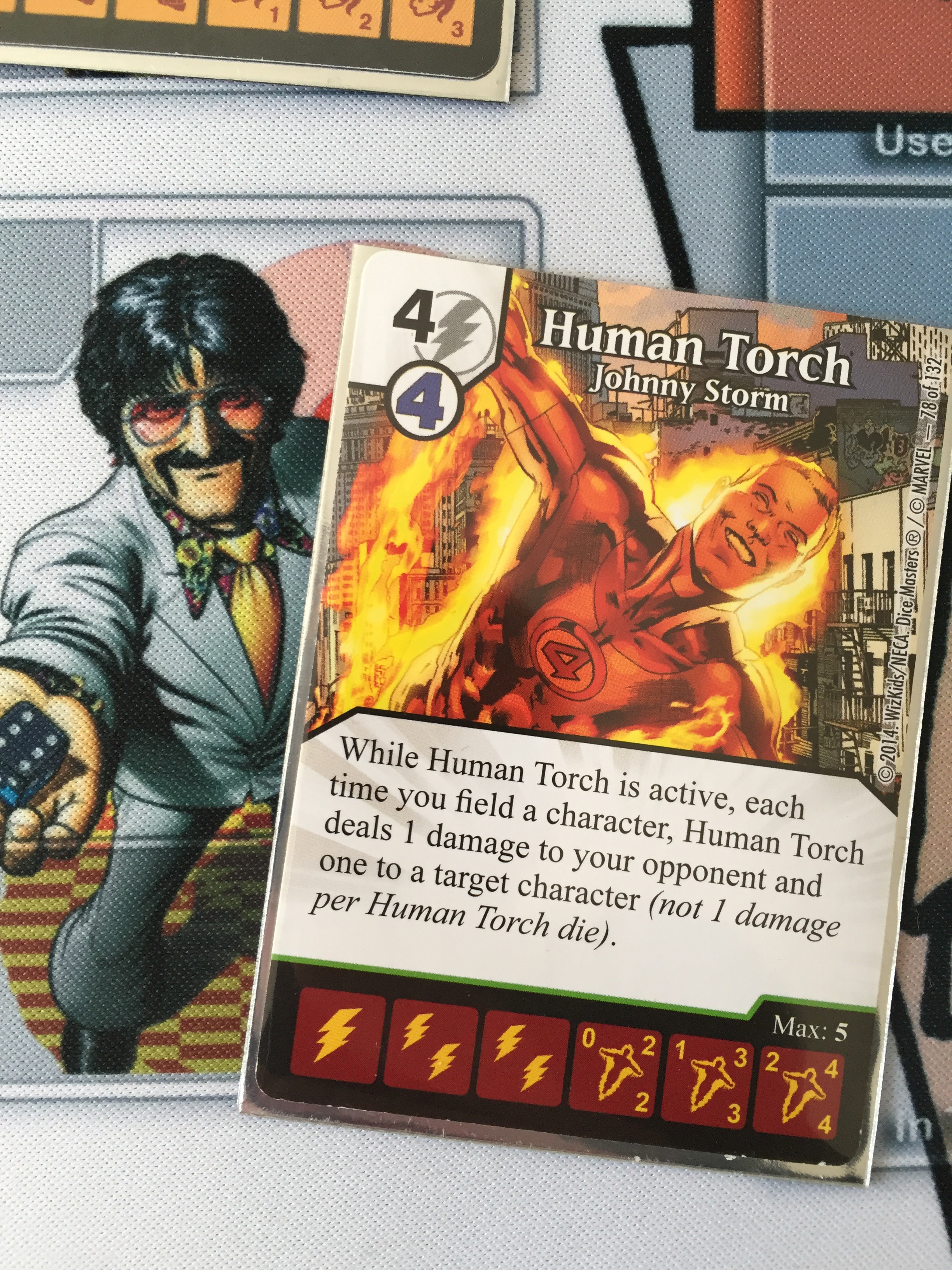 Not too long back I expanded my collection to include the D&D sets and was interested in making new teams that use D&D themes or mechanics. I called out to the Internet for suggestions (You can read about it HERE) and one such suggestion that came back was make a “Johnny Swarm” team.

So…here’s what I put together…

Clearly – the starting point was going to be a ‘Human Torch – Johnny Storm’ card. There’s a guy in my local meta who uses this guy to great effect so I knew what it had been like to be on the receiving end of his burn.

Next up – who to ‘swarm’. The finalists were ‘Kobold – Greater Humanoid ‘,’Goblin – Lesser Humanoid’, or both. The ‘Goblin’, while a touch higher in cost, seemed the more attractive to me for no other reason than the slightly better attack stats, and if early opportunity presents itself to throw them down an empty field in an early round attack then the extra punch is going to make all the difference. The higher cost doesn’t concern me all that much as it is my intention to bring along ‘Big Entrance’ as one of my Basic Actions (a bit more motivated by the “directly in bag” game text than the cost mitigation) 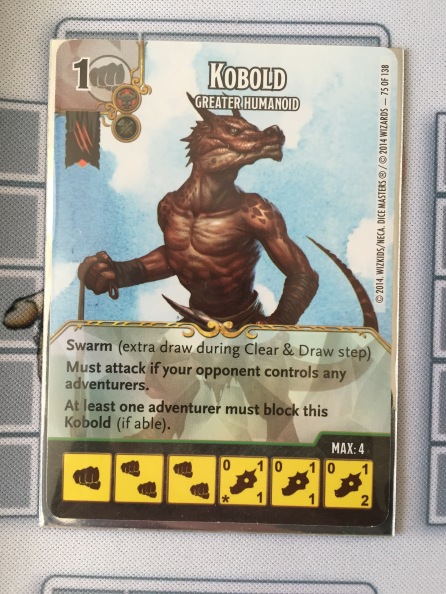 In the end though it’s all academic, as I’ve decided to put both on the team. If I’m going to overwhelm my opponent with ‘Human Torch’ burn I figure I may as well fully commit to the weenie strategy.

One thing I want to do is guarantee my ‘Big Entrance’ in the third turn so I’ve decided my second BAC is going to be ‘Resurrection’. My thought process goes as follows: 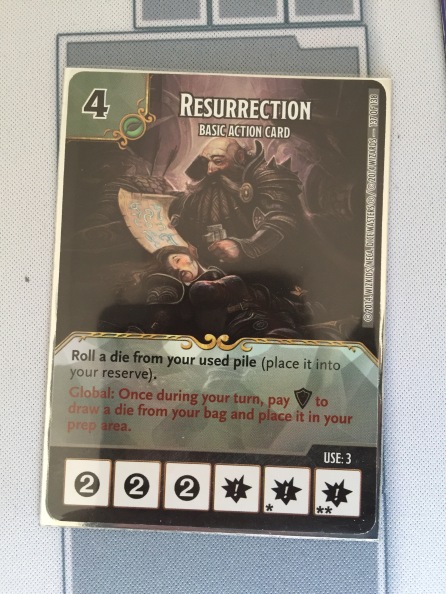 To fully maximise my strategy I need to find an efficient way to cycle my weenie swarm to repeat the ‘Human Torch’ burn and to give me continued ramp. ‘Johnny Storm’ himself can ping some away with his character damage but I want something more reliable so I’m going to drop a fabricating Golem in the team. The Golem I’ve chosen is ‘Clay Golem – Lesser Construct’. 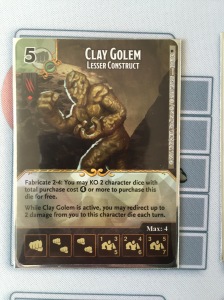 The ‘Golem’ brings with it a lot more utility than just KO’ing weenies to feed the ‘Johnny Storm’ machine. He’s going to provide some handy mid-game muscle that can survive board clear strategies like ‘Hulk – Green Goliath’ and provides a wonderful defensive game text to take advantage of. (Although, if my opponent wants to KO all my weenies and let me re-feed my ‘Human Torch’ burn machine…well…be my guest, I suppose.) He’s also useful for soaking up direct damage with his secondary game text: any ‘Captain America’ or ‘Black Lantern – Green Arrow’ shenanigans will not deter my ‘Human Torch’ burn machine while this dude is out.

Speaking of ‘Hulk – Green Goliath’: he’s not a bad addition to my own team. While the swarm burn machine is pretty potent an effective plan B could well be a weenie charge down the field for some good, old fashioned battle damage. After all: three or four attacking ‘Goblin – Lesser Humanoid’ die have the potential to do up to twelve points of damage, so a cheeky board wipe by ‘Hulk’ followed by a reasonable weenie assault has potential. At the very least – it could keep any pesky characters I’m not too keen on my opponent off the field.

Keeping pesky characters at bay needs to be addressed more by the team. I certainly need to protect ‘Human Torch’ a bit from the likes of ‘Dwarf Wizard – Paragon Zhentarim’ or my weenies from ‘The Joker – Clown Prince of Crime’. Others, such as ‘Iron Fist – The Immortal’ can be damaging to my plan A win con. I thought initially about the ‘Dwarf Wizard – Paragon Zhentarim’ myself, but he doesn’t hold up well against ‘Hulk – Green Goliath’ strategies at his first two levels and my max die count is swift approaching. (Eight weenie die will do that to your team!) So I’ve gone for an old fave: ‘Millenium Puzzle – The Eternal Dungeon’.

It’s not ideal, but I love the fact that it’s a guaranteed banishment to the Used Pile as I see fit, which avoids creating a next turn return for the dice that is giving me grief or slowing my win con.

The remaining two slots on the team are filled by additional defensive measures & some jiggery pokery of my own. The first of these two: ‘Elf Thief – Lesser Harper. He’s cheap, can serve as decent fabricate fodder, and can annoyingly disrupt any Global strategies that need energy in my turn.

The second is our good pal ‘Jinzo – Trap Destroyer’ as a go-to measure for any BAC or Global heavy strategies on the other side of the table.

I feel a little lazy using this guy, but the simple fact of the matter is he is the best at what he does with the added bonus of some muscular stats to boot. How could I not?

Here is the team on the DiceMastersDB: 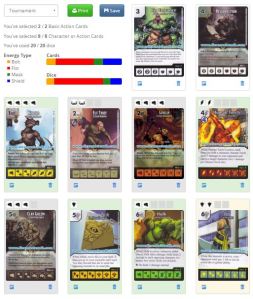 I’m going to test the team out at my next upcoming event and see how it get’s on. I’m even going so far as to consider this team for the upcoming UK Nationals in June so I’m definitely going to need to get some practice in with it.

what do you think? Have you ever tried a ‘Johnny Swarm’ team and was it like this one? Comment below…