The DiceTower unboxing review has been released for the “Civil War” set and the fine screen capping talents of PK2317 over at The Reserve Pool have once again filled our world with spoiler-y goodness. (DiceTower unboxing vid found HERE and PK2317’s Imgur screencaps found HERE)

So I’ve been pouring over the spoilers and here is a collection of my initial thoughts.

I’ve griped about this on The Reserve Pool before, but as a DC fan it disheartens me to see another Marvel set come out with the affiliation ranks getting further bolstered but none of the DC sets coming through with good affiliation consistency. One day the Justice League may just get some new blood to give my beloved, but far from competitive, ‘Retaliation’ build some more options.

That said – there is one affiliation opportunity that leaps out at me in this set: I am definitely seeing the potential to breath new, interesting variants on the ‘Nick Fury – Patch’ archetype. Especially with card like…

Wow. This one is going to be interesting. The potential in two attack steps cannot be ignored and I’ll certainly be looking at how I can make some use of this card for fun.

I’ve got a lot of unstructured half-ideas rolling about my brain on this one – can I get something together with the aforementioned ‘Nick Fury – Patch’ (two attack steps with double dealing Avengers, hmmmm)? Can I take advantage of ‘Overcrush’ or ‘Fast’ in this scenario (particularly with someone like the new ‘Rocket Raccoon – Bandit’)? Can I get something together that can make interesting use of ‘Batcave – Home Sweet Cave’? And so on… 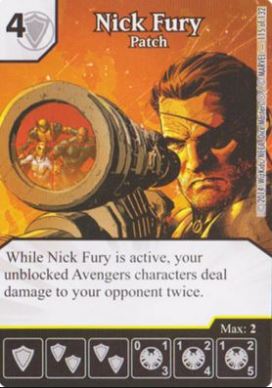 I’m not really sure how competitive it could be, but I’m sure looking forward to getting a build centred around her made for my own enjoyment.

This one caught my eye. I’m currently using ‘Mary Jane – MJ’ as an Overcrush solution but an Action Die option to bring Overcrush to a team comes with its own set of benefits & possibilities that I may like explore.

It’s cheap, adds a little buff, and the fact it only target Fist characters can absolutely be worked with.

It’s got some draft potential too. It’s clearly got a wonderful synergy with it’s keeper ‘Ant Man – Scott Lang’. After struggling in draft with the high cost of ‘World’s Finest’ characters I’m curious to see how low cost combos like this work out for ‘Civil War’ drafting.

When I read this guy’s game text I started to develop a crazy build idea. I’ve even thought of a name for the team: “disproportionate response”. Watch this space – I’ll make a brew post about it soon…

I think this may turn out to be a pretty valuable card in my current meta. It’s quite versatile really it serves to challenge a number of Direct Damage I find myself regularly facing at my FLGS.  The only downside is his costs, but I will most definitely be experimenting with him a bit and time will tell if he’s going to do what I need.

I think the new ‘intimidate’ keyword is going to be very interesting indeed.

Removing opponent’s dice from the field for a clear run at them has been a cornerstone strategy of the game since ‘Storm’ appeared in the AvX starter and ‘Intimidate’ brings a flood of new characters able to do just that. (Even if it is for just one turn.) 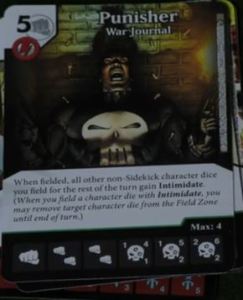 One character stands out in particular: ‘The Punisher – War Journal’. I expect to see some curious builds coming down the line that will be capitalising upon this game text.

I don’t know how beneficial this card is competitively, but I do think it’s interesting that we now have a character who’s game texts initiate even when not active. There’s only one other I can think of that does that: ‘Curse of Dragon – Skeletal Structure’.

It may well be a simple curiosity – it just stood out to me that I would be trying to roll energy faces with a character (Intentionally – for a change!)

So, there you go, my thoughts on the spoilers we’ve seen so far. I’m certain there will be something in there that will have yet unseen potential that someone will brew up and I’m eager to see what comes.

It’ll also be fun to get into the grav feed and discover the cards we’ve not had spoiled – what gems could there be waiting us? Time will tell…

What did you think of the spoiled cards? Anything in particular leap out at you? Am I way off the mark with those that stood out to me? Let me know in the comments below…