It was the standing fornightly event down at Element Games in Stockport on Tuesday night.

It was an Unlimited Constructed event and a number of us used the event to get yet more practice in with our teams for the upcoming Nationals. I myself took along the “Johnny Swarm” build regular readers will know I’ve been fine tuning for awhile.

We had seven participants and played “best of three” 45 minute rounds.

Here’s how it went:

*I forgot to take photos! Sorry folks – you will have to survive without the pics of us fine, handsome gents playing Dicemasters…*

In this round I was playing Guy, who was fielding a Sidekick/Burn combo style build. Some of the key characters I saw in the two games of this round were ‘Punisher – McRook’, ‘Captain America – Natural Leader’, ‘Human Torch -Johnny Storm’ (he’s very popular in my local meta), and ‘Storm – Wind Rider’. 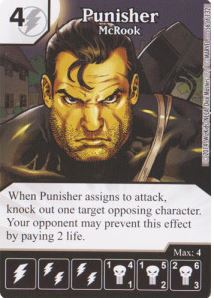 I flew out the gate following my plan A win condition – getting ‘Human Torch – Johnny Storm’ purchased first turn then going crazy on buying my cheap characters to get the swarm burn machine going (and to make some good use of ‘Constantine – Hellblazer’, don’t think I didn’t spot that ‘Storm – Wind Rider’ on the other side of the table!)

The pressure was most certainly on. ‘The Punisher  – McRook’ was laying into me oppressively and whittling me down two life at a time. Thankfully ‘The Punisher’ doesn’t have much in the way of a defense and I was eventually able to get it together to ping him off with ‘Human Torch – Johnny Storm’ character damage and then ‘Constantine’ him out of my face when he was fielded the next turn.

I held him well enough at bay and the round ended when the Swarm mechanic kicked in perfectly and I pulled a horde of zero field cost ‘Kobolds’ and ‘Goblins’ to field. Game One to me.

Game two of the round did not go so favourably.  Guy shifted gear and bought up his own ‘Human Torch – Johnny Storm’ and got into a nice groove of fielding sidekicks. He pinged away my first ‘Kobold’ in the field so I couldn’t Swarm up. Not that it mattered; a few dodgy dice rolls also meant I had no ‘Human Torch’ in the field anyway, I kept making bad ‘Constantine’ choices, and I was too slow thinking things through & get my ‘Dwarf Wizard – Paragon Zhentarim’ to blank that troublesome ‘Human Torch’.

Soon enough a ‘Captain America – Natural Leader’ came along and the little sidekick squad became just a little tougher – tougher enough that I couldn’t keep him at bay.

He took my twentieth point of life almost exactly as the timer went and we ended the round as a tie with one game each.

My second round was against Matt, who was playing an Overcrush themed team. His main win condition was centred around low purchase cost/high attack value characters ‘Black Panther – Wakandan Chief’ and ‘Scarlet Spider – Ben’ and giving them Overcrush with ‘Mary Jane – MJ’ and the ‘Hulk Out’ Basic Action.

The MVP of the first game this round was the ‘Transfer Power’ BAC Global. Matt got his ‘Black Panther’ dice bought up & fielded swiftly while I busied myself setting up my ‘Human Torch’ and getting my Swarmers together, but the frightening prospect of an Overcrush battering from a couple of ‘Black Panther’ die never became a reality due to a. Matt’s unlucky rolls giving him level one characters and b. my abundance of lower attack characters to trade out with ‘Transfer Power’.

With my weenie horde coming through the bag, and a saved Shield face or two just in case, I was able to burn Matt & his characters down with ‘Human Torch’ and bide my time until his defensive capability was too low to keep the ‘Kobold’/’Goblin’ mob from finishing him off in a final surge.

The second game went in a similar direction, although this time around my dice rolls where less favourable.  My saving grace was locking down his ‘Mary Jane – MJ’ “when fielded” effect with ‘Constantine – Hellblazer’ on the few early occasion I was caught short of Shield energy to use the ‘Transfer Power’ Global.

I gave my “Fellowship” vote to Matt for the event. He took both losses with sports-manly spirit and remained good humoured throughout, even once he realised the devastating potential ‘Transfer Power’ had for his team.

I was paired up against Steve in this round, who was playing a ‘Human Torch – Johnny Storm’ team of his own. (I told you he was popular in my local meta) Notably team members I spotted on the other side of the table were ‘Cyclops – Field Leader’, ‘Hulk – Green Goliath’, ‘Beast – Genetic Expert’, PXG, and the aforementioned ‘Human Torch’.

In the first game I got my burn machine in motion but grabbed an early ‘Wasp – Founding Avenger’ to tax Ste’s PXG usage. It turn turned into a burn off – who could ‘Human Torch’ the other to death quicker.

Fortunately; a few well placed ‘Human Torch’ KO’s allowed me to ‘Constantine – Hellblazer’ him when he was re-fielded and the handful of turns I was burning and he wasn’t allowed me to take the lead and reach the win con quicker.

The second game did not go so smooth. Firstly; I kept forgetting to use my ‘Constantine – Hellblazer’ and neglected to name a character at a few integral moments to keep my ass out the sling. Secondly; Ste ramped up quickly to his ‘Hulk – Green Goliath’. I bought up my ‘Dwarf Wizard – Paragon Zhentarim’ in reaction to the big green monster but he hit the field before the Dwarf could do his thing.

It came down to one “make or break” round each, and I have to admit that Ste’s own ‘Distraction’ BAC was my saving grace. The ‘Hulk’ cleared my field with brutal efficiency but I managed to survive the subsequent onslaught using the ‘Distraction’ Global. Then – Lady Luck struck and the ‘Dwarf Wizard’ came out of my bag. With the enormous roll of ‘Kobolds’ & ‘Goblins’ that had been KO’d last turn I fielded my ‘Dwarf Wizard’ first, blanked the ‘Hulk’ and then swiftly fielded ‘Human Torch’ with the army of weenies to win the game, and the round.

I had a cracking time at the event and enjoyed every single game, even with the fine tuning my Nationals team for the last few events making things feel a little repetitive. Going 2-1-0 on the event he earned me the top spot and I walked away with six brand new Civil War boosters for my efforts.

To top it all off; when I got home and opened those prize boosters, check out what I got:

Playing the same team week in, week out gets repetitive it’s been great really getting to know a team and I’ve improved loads with my team building & strategic playing, but once Nationals has passed I’m going to re-discover my love of casually building random teams for my own entertainment with themes and curious combos. At times through this event it felt a little too “going through the motions” and I don’t ever want to bore of this game.

‘Storm’ out, ‘Dwarf Wizard’ in I love ‘Storm’, but I play tested with the ‘Dwarf Wizard’ at the event(upon the advice of the Reddit hive mind) and he works well on a number of counts. He comes at a lower purchase cost, there’s no element of chance, and (as long as I can keep him alive) he can void a character indefinitely.

I hope you enjoyed my re-cap. I’m going to try and squeeze in one, maybe two more events before UK Nationals at the start of June so watch this space for some more event overviews in the near future.