We had a big event in the UK DiceMasters  calendar over the weekend at the UK Games Expo in Birmingham: the 2015/16 National Championship.

The timetable was as follows:

There were 36 players at the Friday Constructed qualifier and 22 at the Rainbow Draft. The Top 9 from Friday and the Top 7 from Saturday would earn themselves entry to the final on Sunday.

I was only able to make it down on the Friday as I was going on holiday on the Saturday with the family ( I am writing this right now in a caravan in the Lincolnshire Wolds – it’s a coooooold night!) but wanted to play at a higher level and had resigned myself to the fact that if I qualified I would have to forfeit my position OR make a very uncomfortable phone call to my Wife!

As it went, I placed tenth, just outside of the top 10% to qualify, but the day’s play was well worth it and I had a tremendous time. The opportunity to meet all the guys I had been bantering with over the UK Facebook group was worth the trip alone, made all the sweeter by hours of non-stop DiceMasters and topped off with some awesome participation swag.

The event was masterfully TO’d by my fellow Element Games alum Ste Cassidy, ably assisted by Justin Read. Despite a few technical issues (the event centre’s Wi-Fi was somewhat challenged by the thousands of game-nerds descending on it and hanging the abundance of smartphones & tablets off the Wi-Fi. There was a sorry looking Netgear router somewhere in the building popping & smoking I’m certain.) and the need for some sort of spell-book & talisman to unlock the inner secrets of working the Wizkids Event System the whole thing went off without any real hitches and they ran a ship shape event. Word-of-mouth feedback on the day and subsequent Facebook posts had nothing but the utmost respect for the management of the event. Great job gents! 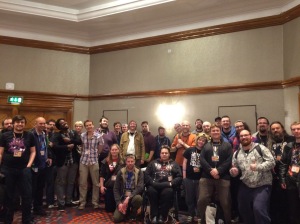 The participants were, without a doubt, the finest gathering of competitive players I’ve had the pleasure to play in all of my years of gaming. Everyone was just delightful to talk to and hang out with. Nobody was “that guy” taking it all too seriously and being a bad winner (you know the type I mean) and conversation flowed freely between matches and through the meal breaks as we all just generally relaxed together over pints/brews in the bar (some of us were designated driving later so no beers for us: just good, old fashioned tea!) or ate together in the sunshine by the food vans.

The general atmosphere of the event was was warm, friendly and fun, a testament to the wonderful attitude of the competitors. The level of sportsmanship was outstanding, and as I drove home on Friday night I was riding high, overwhelmed by my excitement for the next set of events when I could get together and play this beautiful group of people again. (When do the 16/17 regionals start? Pleeeeease be soon!)

Many had travelled the length & breadth of the island; from as far North as Lanarkshire, as far South as The Isle of Wight, as Far East as Lincolnshire, and as far West as Dublin.

We even had a player, Chris Kay, travel back from the 23rd century to compete in his Rip Hunter, Legends of Tomorrow,  cosplay.


The qualifying rankings for day one were:

*these might need double-checking. In the Lincolnshire caravan there is little in the way of connectivity so I’ve put these lists together from two-parts memory and one-part Facebook snippets when near a wi-fi hotspot!

We saw a great mix of teams with some anticipated meta builds matching up against some creative curiosities that gave the event some real inventive flavour and energy. We saw how the Bard would face off against Doomsday, how effective a Civil War Punisher could be against a Tsarina, and how Johnny Swarm fares against a DC Control dream team.

An enormous congratulations to Ben who took the top spot on Sunday to become the UK Champion 2016 – well done Ben!

I’ll be writing up my own re-cap of Friday in the next few days and providing more insight into the teams & rounds I played. I’ve asked a few of the guys if they would “special guest” blog for me so, all things going to plan, I should have plenty of content in the coming days to add a bit more depth for those interested in knowing more about the event and the growing UK scene​, including Ben, our new champion.
Watch this space for more soon…