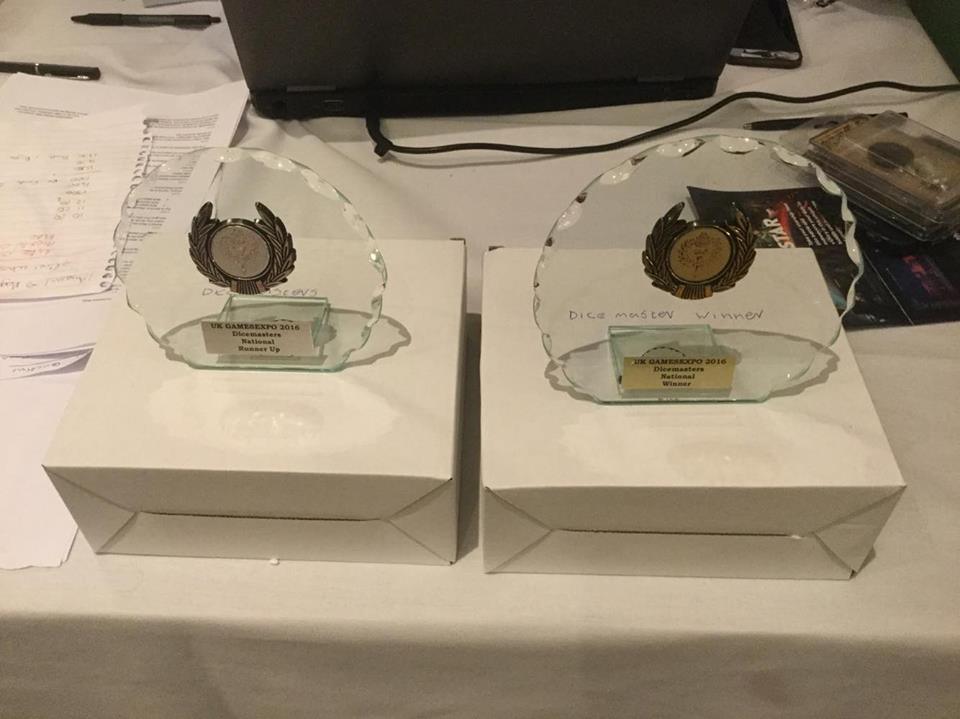 Hi Folks. Here is the third and final part of Special Guest Blogger BenSaidScott’s overview of his journey to becoming the UK Dice Masters National Champion 2016.

In this entry; Ben provides a re-cap of his games on the day and his reflections on the teams he faced in the Top 16 face off on the Sunday.

Because of qualifying on Friday I didn’t have to go through the terrible process of draft qualifying, and took the opportunity to enjoy some of the exciting exhibitions the Expo had to offer. Unlike the Friday, qualifying on Saturday was done by process of Civil War draft. I had several friends who went through the process and because of the “luck of the draw” of the cards their chances were up in the air.

Never the less, the few times I did pop in the event seemed to be running a lot smoother than on Friday, and the camaraderie was still high between players. Several of the people who had already qualified were also playing, and it goes to show the passion for the game, that people were willing to sacrifice their time at the con just to play Dice Masters.

One of the times I did pop-in to check on the event Eric Lang was in the hall signing stuff. He was great and really generous with his time. One of the things that Eric spent a lot of time doing was fielding questions about Bard. He signed many mats “Bard vs Bard” in the attack zone, even saying to one person that he would ban Bard (it was said in jest, but still). It’s nice to know he is aware of the problems, and I look forward to seeing what solutions present themselves after worlds.

All together I commend anyone who completed all three days. I’m so glad I didn’t, and that Saturday was spent demoing other games, watching the Dice Tower live, participating in the excellent Dark Room and generally just experiencing what is a fabulous board gaming convention.

The big day; I was super tired for this. A lack of sleep and a bit too much wine were definitely darkening my mood as I got the train toward the NEC. However walking into the hall everyone seemed to be in much the same state as me. Two days of gaming joy had taken their toll. I had been up all night worrying about changing my team or not.

While I had done well on Friday I still felt like I needed to be more efficient in what I had been doing to be successful. I also thought about dropping my own PXG to include Prismatic Spray, everyone else had brought PXG so why should I have it. Luckily I had pre-empted these feelings of doubt and had purposefully left all my other cards at home. I knew my team was strong, I was committed.  The format was as follows: 16 teams, 4 rounds of Swiss followed by cut to top 4.

The first game was against Mark on table 1. He had been one of the first people I talked to on the Friday qualifiers and he was great throughout the event. He was really supportive throughout the weekend and stuck around to the very end of the day to do some trades with me.

Mark had made it through to the final day via the draft. He said he was pleased to be there, rather than expecting to win. He was running a lot of defensive characters from Civil War, hoping to burn through using the uncommon Venom, and the Thunderbolt combo of Baron Zemo & Songbird. Against the oppressive nature of my team Mark found it very difficult to get his bigger hitter characters out, and using Imprisoned combo’d with Magic Missile I was able to grind out a 2-0 victory.

This match was important for two reasons: one, it really woke me up. Having to concentrate on whether his damage mitigation prevents lethal damage, or not, was a real brain burner task. But more importantly It showed me that Magic Missile in conjunction with Imprisoned was more than enough of a board clear, so I didn’t need to get to Hulk for every game. This made my game plan much quicker and more streamlined.

I was playing Bob. This was a rematch from Friday and though I don’t remember exactly, I believe Bob, like me, had resisted the temptation to change teams.

Again, as it had been on the Friday, it was a tough match. Bob is an excellent player and was quick to counter every move I made. But as had happened previously my team’s control was proving a difficult thing to break down without Constantine Hellblazer to stop my Dwarf Wizard. I took the first game, but with Bob going first in the second round he changed tact. Rather than trying to establish his own board control Bob sacrificed ramp early, enabling him to buy a Red Dragon and Hulk by turn 4. Rather than waiting to get Bard out he was happy to just swing with his big guys, using the Red Dragon Breath and Magic Missile to clear the field and let the two big boys punch through. It was one of the best games I saw all tournament and it surprised me that, despite the Meta, just having the bigger dudes could win a game.

My third round was against Andrew Short. I think Andy surprised everyone at the tournament by running the uncommon Doomsday and the BAC Trusted Friend.

This combo is insanely good. Not only is it excellent clearance it also pushes the KO’d die to the Used Pile. You can use it on many characters at the same time, given enough masks, clear the field and fill up your opponents Used Pile and have a die with great stats in the field. It’s brilliant.

Luckily for me I managed to have the two things that stopped Doomsday/ Trusted Friend combo in it’s tracks: Hellblazer and Oracle were my MVPs. I managed to win the first and third game going first both times.

Going into round 4 only two of us were on 3 wins 0 losses: so both me and Patrick knew we were through to top 4. That didn’t make the game any less brutal. Even though there were some great players over the course of the weekend I think Patrick was the best technical player I played over the weekend, and I’m not just saying that because he won Nationals the previous year.

During the first game, though I went second I managed to get out Oracle and Elf Thief before my opponent, using his Polymorph, which wrecked his ramp. That paired with Imprisoned did wonders. 1-0.

The second game was brutal. Again going last this time Patrick didn’t mess around and forced me into an Imprisoned corner. I managed to capture a bunch of his dice and Dwarf Wizard his Oracle and pull myself back into the game following some missed rolls from Patrick. Going into the last few turns of the game I was feeling good. I had enough masks for perfect ramp, enough damage for lethal if I could get the board clear and an Imprisoned coming through my bag. Patrick realised this and spent all 6 of his energy on KO’ing my Dwarf Wizard, rather than making a purchase. This freed up his Oracle and leaving me with not enough energy for perfect ramp. I PXG’d as best I could but missed drawing the Imprisoned I needed. It was a spectacular play and one that completely blindsided me. Patrick took the second game.

The third game was another slog, going all the way into turns. But because I had gone first I just managed to eke out a win. 2-1 round finish, giving me an overall 4-0 and ranked first going into top 4.

Aside from myself, Patrick and Paul (who I’d play in the final) there had been four players on 2-1-1. Based on the best ranking score Andrew, who I had faced in Round 3, made it into the top 4 ranked 4th. It was to my benefit that, by his own admission, Andrew has a massive drop off in results after about 4 games of Dice Masters. It had happened to him on the Friday qualifier, where he had won his first 4 matches and lost his last two. A similar effect happened here. I played in much the same way, stopping his awesome Doomsday with a mixture of Hellblazer and Oracle and managed to take the victory pretty quickly. 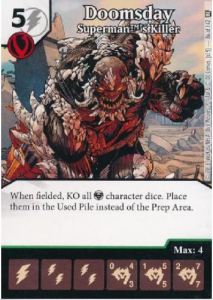 Andrew was really humble about the result and deserved his top 4 finish. I hope he doesn’t mind if I steal the Doomsday idea.

Because of the speed at which I took the Semi’s I managed to have about half an hour between the Semis and the Finals. Paul had had no such luck. He said to me that he was lucky to have beaten Patrick. And while Patrick was a brilliant player I believe Paul was just being humble.

We had three great games. By this point the Elf Thief/ Oracle combo was proving to be the most brutal thing in DM. But Paul kept me focused on the game, reminding me several times that I had to remember to name someone using Hellblazer. I tried to return the help, though probably forgot a couple of times. It was a great delight that even amidst the pressure of a final the friendliness of this game shone through.

The first game was a long one, with both of us trying (and failing) to ramp efficiently. I managed to squeak out a victory by just getting enough sidekicks through with Bard buffs.

The second game again went right to the wire. As time was called and we entered turns Paul was ahead in fielded characters but I had a Hulk. Knowing that I could stall out for the win I knew Paul was going to swing with everything soon. But I counted up carefully how many characters could get through if I didn’t ping Hulk, and instead ramped. I wanted to win 2-0 rather than 1-0. I counted 16 damage, which would have meant that I could swing through on the next turn, and was almost guaranteed the win. I counted again out loud just to make sure and even asked Paul, before deciding to PXG. He swung anyway, and we counted up. That’s when I realised I had made a crucial mistake. Bloody Bard, bloody stacks. It was 32 damage and it was 1-1.

With that we were into the decider, no time limit. I don’t remember a lot of that game but I remember that I managed to get the win and was ecstatic. 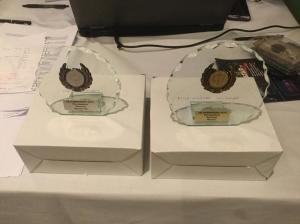 So that’s it, that was UK Nationals 2016 and a little bit of Games Expo. It was brilliant and I can’t wait for next year. It was mentioned that maybe some WKO are coming to the UK in the next 12 months so I hope we can grow the UK scene and that the pool of players gets even stronger and friendlier, though I don’t know how that is possible.

There you go folks, that concludes  Ben’s guest posts (for now… he is welcome back anytime) and I hope you enjoyed reading the Dice Masters UK Nationals Champion’s account of his journey.

It was pleasing to see in the US Nationals & Worlds coverage to see Ben’s team serve as an inspiration for teams being played (with some success) on the International competitive scene. In a recent TRP Blog the team even got a name “The Big Ben Bard”!

i hope you will keep coming back for more news & coverage about the UK Dice Masters community & events as the next wave of National competition commences with Regionals through August – December.