After Nationals and a short half-term getaway it was back to real life and normal routine, which naturally included a trip down to Element Games in Stockport for the standing Tuesday night play.

We had six players for the event and we’re playing an Unlimited Constructed format. There was to be three rounds of Swiss, 45 minutes a piece, playing first to three games in each round.

Once again, it was nice to see of the six another new player join the fold who had not participated in a Casual Event before. The scene at Element Games is seeing a steady rate of growth in the Dice Masters player base and is now boasting something like 16/17 players, with roughly a 50/50 split between the regular and more irregular players.

I had been playing the same team for some time leading up to the UK Nationals so decided to take along the Yu Gi Oh only team I had challenged myself to build the week before. (Details of which can be found in my post HERE)

Here’s how it went…

My first round was against Matt, who had returned this week with his ‘Mary Jane – MJ’ Overcrush build.

It’s funny, but by pure coincidence I regularly get drawn to play Matt in my first round. Matt has been playing & tuning his Overcrush build for a few weeks, and the key difference was he was experimenting with ‘Kal El – From Another World’, the intention being to attack with ‘Kal El’, swap boost his Defense, swap it with the Global, and then give him Overcrush with ‘Mary Jane – MJ’. The team also had ‘Black Panther – Wakandan Chief’ for high impact Overcrushing onslaughts.

My Yu Gi Oh build moved fast and my field filled up quickly with ‘Morphing Jar’ and ‘Blade Knight’ die for some quick early damage.

I used BEWD a few times to ramp up and grab some ‘Dark Magician’ and ‘Mystic Elf’ die. By the time Matt had bought up his offensive force AND got his ‘Mary Jane’ die lined up to give them Overcrush I had driven through enough damage to put him at around 9 life, and had some hefty defense stats with “the Girls” (as I like to now call them).

It was then just a waiting game. I chipped away at Matt’s characters and used my ‘Mystic Elf’ to soak up attacks, gain me some life, and prep character die quicker. I eventually had enough in the field to charge with more characters than Matt could defend, taking the first game.

The second game of the round went super quick – in no small part to Matt receiving the curse of the Dice Gods and finding it almost unnaturally difficult to roll characters.

Also, Matt decided to try a different strategy out by flipping his buy order and loading up on ‘Mary Jane’ die first and going for his muscle second. My ‘Blade Knight’ took full advantage of this, and I once again was able to get some solid early hits in of three or four points of damage Overcrushing sidekicks and ‘MJ’.

This, along with the later difficulty getting his characters, allowed me to go for lethal and win my second game, and the round.

In my second round I was facing Ed, who was playing an all D&D build that used such cards as ‘Halfling Thief – Apprentice  Emerald Enclave’, ‘Clay Golem – Lesser Construct’,  ‘Cockatrice – Lesser Monstrosity’, and, for the beat down, ‘Purple Worm – Greater Beast’. 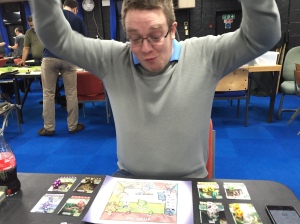 Ed’s strategy was to keep as many of my characters as possible away from the field with ‘Halfling Thief’ and ‘Cockatrice’ (rinsing & repeating with the ‘Clay Golem’ Fabricate mechanic) until such time as he could ramp to the ‘Purple Worm’ for some nasty Overcrush business.

And that’s exactly what happened in the first game. It took me a few turns to realise what was going on; after a number of ‘Halfling Thief’ die got fielded and moved my purchased characters from the bag to the Used Pile.

In response I purchased up my ‘Mystical Elf’ in an attempt to mitigate the ‘Halfling Thief’ impact, but it was too little, too late. I had also failed to realise my ‘Monster Reborn’ Basic Action could have reeeeeeally helped me out. The ‘Purple Worm’ had come and started belting me for more than I could handle. Between the ‘Purple Worm’ die’s Overcrush, his KO game-text, and ‘Cockatrice’ I was soon nailed for lethal. The first game went to Ed.

The second game went better for me, but it was damn close. This time I moved much more quickly for my ‘Monster Reborn’ in an attempt to keep those nasty little ‘Halfling Thief’ buggers from messing with the dice in my bag.

It did just the trick. I purchased some of my ‘Mystical Elf’ and ‘Dark Magician Girl’ die with my ‘Morphing Jar’ energy and moved them to Prep ASAP with ‘Monster Reborn’. “The Girls” were also just the pair to minimise the ‘Cockatrice’ game-text too.

Luckily, Ed didn’t succeed in ramping up to his frightening ‘Purple Worm’ and after a few rounds of some hard fought back & forth I managed to eke out a close win.We were at time, and the round ended at a tie with one game a piece.

My third round was against Guy, who was playing a strong Marvel-centric team built around cards like ‘Punisher – McRook’ and ‘Wolverine – Formerly Weapon Ten’.

Holy hell, that ‘Wolverine’ is a beast. In the first game I got caught right out in turn three with my pants down and my field wide open for a lone Lvl 3 ‘Wolverine’ to jump in and smack me for twelve. (He is the best at what he does, after all…)

I was in a fight to survive. Thankfully, clinging on with 8 life, I got some characters in the field to start blocking the clawed menace. ‘Lord of D.’ also made his first appearance of the night, nice & blinged up with the ‘Ring of Magnetism’, to help me with ‘Punisher – McRook’ and his brutal game-text.

We spent some time staring down each other’s equally equipped walls, neither of us quite able to pull something off to take the edge. This war of attrition was finally broken when Guy changed direction slightly and brought his ‘Captain America – Natural Leader’ into the field and some sidekicks – this led to enough of a strong character overhang that I couldn’t prevent the lethal damage from an “all-in” attack.

The second game of the round didn’t really go much different, other than the fact I got some early blockers out this time to keep an aggressive, early attacks from the ‘Wolverine’ out of my hair.

We both walled up as in the last game: I had my army of ‘Morphing Jars’ and ‘Blade Knights’ out (Ably supported by  the ‘Lord of D.’/’Ring of Magnetism’ combo) and Guy had his ‘Punishers’ and’Wolverines’ out. We got a few chips in here and there on one another but neither could get something lethal pulled off.

Where it all went wrong for me was with a trip up in accounting. I was utterly convinced Guy had started with less ‘Wolverine’ die on his card than he actually did, and I certainly hadn’t recalled it being purchased. I weighed up the board to make a big play under the impression he had just four sidekicks in the bag; I was going to take him down to the line, survive a turn of sidekick only rolls and potential returning characters from prep (which I doubted he could afford to field all together in one turn) , and finish him off next turn. 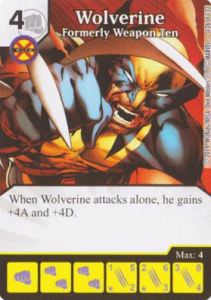 This was not to be – Guy had, in fact, one more ‘Wolverine’ die tucked away in his bag that I thought he hadn’t, and I had left myself more or less exposed for the turn. Guy dropped a ‘Wolverine’ into the field, and strolled over to hit me for twelve once again.

I was clinging on by a thread, when more calamity struck – I failed to roll enough characters to block the next turn’s attacks. It was over – I was hit for lethal with ease the next turn. Two games to nil to Guy and a lost round.

Another great event down at Element Games, and some cracking fun playing with a themed team (Which I fully intend on tuning and coming back stronger), even if I didn’t pick up any prize boosters or OP cards.

The next event in the diary was a Rainbow Draft on the coming Sunday at Fanboy Three in Manchester, which, because I’m running a bit behind typing this up, I actually played yesterday and will re-cap in the next few days.