I’ve always fancied putting together a team centred around the mighty powerhouse that is ‘Thanos – Infinite’ for funsies, and the arrival of a handful of new characters on the scene recently have made me finally hunker down and put a team together around him. 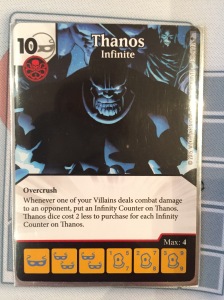 The card that has caught my eye to make this build work is ‘Baron Zemo – Evil Leadership’. I played him in a recent Civil War Rainbow Draft to great effect and made the connection because the ‘Thanos’ OP card was in the prize pool, and it just sorta got me thinking. He is a cheap Mask character who can become unblock-able and get some Villainous combat damage through on my journey to the enormous Overcrushing delight of ‘Thanos’.

The condition to make ‘Baron Zemo’ unblock-able is a KO’ed dice I own. I plan on meeting this condition with ‘Blue Eyes White Dragon – Monstrous Dragon’, which also has the added value of contributing to my ramp. This card is becoming a regular staple of my builds – there are just too many lovely game effects that kick in when characters are KO’d! 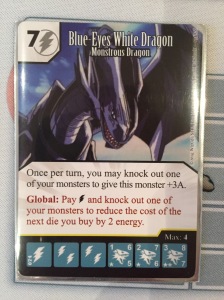 If pushing damage through with ‘Baron Zemo’ is my win con, with mid-to-late game ‘Thanos’ for back up, then I’m going to need to protect my attackers from Globals. Such Basic Actions as ‘Blink Transmutation’ and ‘Distraction’ will ruin all my ‘Baron Zemo’ fun so I need to prepare (they are popular cards in my local meta). For this I am going to use ‘Human Paladin – Lesser Emerald Enclave’. 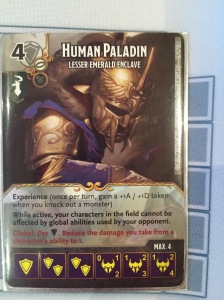 He’s the classic go to for Global protection, and comes with the added bonus of a useful little Global of his own for ability damage protection. With him in the field my ‘Baron Zemo’ die should be well defended from any Global molestation.

Next up; I need a solid cheap character to KO to make my ‘Baron Zemo’ game text take effect. There’s lots of excellent choices to consider here as tempting options to easily support the team. My first instinct is to go with a low-cost utility card like ‘Morphing Jar – Canopic Jar’ or ‘Alfred – MI5’; the Low cost of the former will help with ramp and the resilience of the latter is incredible. I also considered the new Swarming ‘Foot Ninja’ for the ramp potential and some Villain synergy.

But, instead, I’ve decided to go with ‘Kobold – Greater Humanoid’. 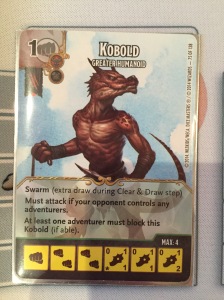 He’s incredibly cheap, brings some ramp with his ‘Swarm’ game-text and provides much needed Fist energy for another intended strategy towards my win con: ‘The Outsider’ Global. 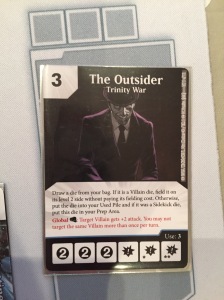 While ‘the Outsider’ is a risky prospect as a ramp solution (as its not a wholly Villain affiliation team), the Global is going to help me drive through more damage with ‘Baron Zemo’ and make ‘Thanos’ a more frightening beast as a mid-game Plan B.

Speaking of BACs; my second Basic Action is ‘Front Line’.

It’s a bit pricey at a five cost, but makes a nice go to for some further Attack boost for my ‘Zemo. The Global will also serve as a useful bit of shenanigans if/when I get the big man out to make some good use of the Overcrush. I’ll need to get my ‘Human Paladin’ out early to minimise the risk of it being turned on me, but I don’t see that as too much of a challenge.

Another interesting addition to the team I am considering is the new ‘Krang – Ruler of Dimension X’. 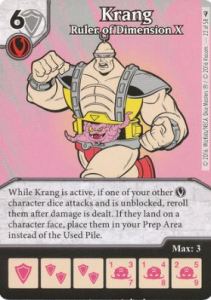 He’s a little on the costly side, but I like the idea of him potentially recycling my ‘Baron Zemo’ die faster ready for another unblockable run at my opponent, and with BEWD and the ‘Kobold’ die rotating around I’m hoping cost is not too much of an issue. He’s also got big defensive stats that may help out in my local meta in which I quite often see Overcrushing teams played.

Now onto a bit of spot removal, and thanks to a suggestion from the Reddit hive-mind I have a great candidate: ‘Nitro – Explosive Personality’.

At a purchase cost of three he’s the right price and has a great synergy with my BEWD and ‘Baron Zemo’ strategy. He’s a little bit more limited than…say… ‘Solomon Grundy – Buried on a Sunday’, with the KO being tied into his Defense stat, but I’m not so concerned by that as he has enough clout to hopefully handle most of the regular sorts of pests I see in my local meta (such as ‘Human Torch’, ‘Constantine’ and ‘Oracle’), and, at that price, I consider him more useful.

Last up is a bit of meta protection with ‘Constantine – Hellblazer’. 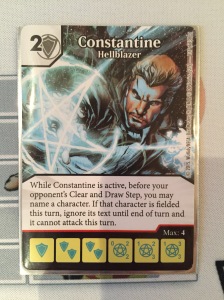 There’s a lot of “When Fielded” effects in the meta that could mess with my plans. Cards like AvX ‘Storm’ and ‘Hawkeye – Longbow’ are popular cards for running interference around these parts, and ‘Constantine’ is just the ticket to keep those nasty interruptions get in the way.

So, there’s my little “Zemo/Thanos” team up build. I’ll be giving it a little go at the next Casual OP night doe at FLGS.

Here it is on the DicemastersDB for anyone interested:

I’d love some feedback – so please put some words in the comments section below. Is there a good card I should consider? Can you see a pitfall I’ve failed to identify? Do you have a similar variant of your own? Let me know…