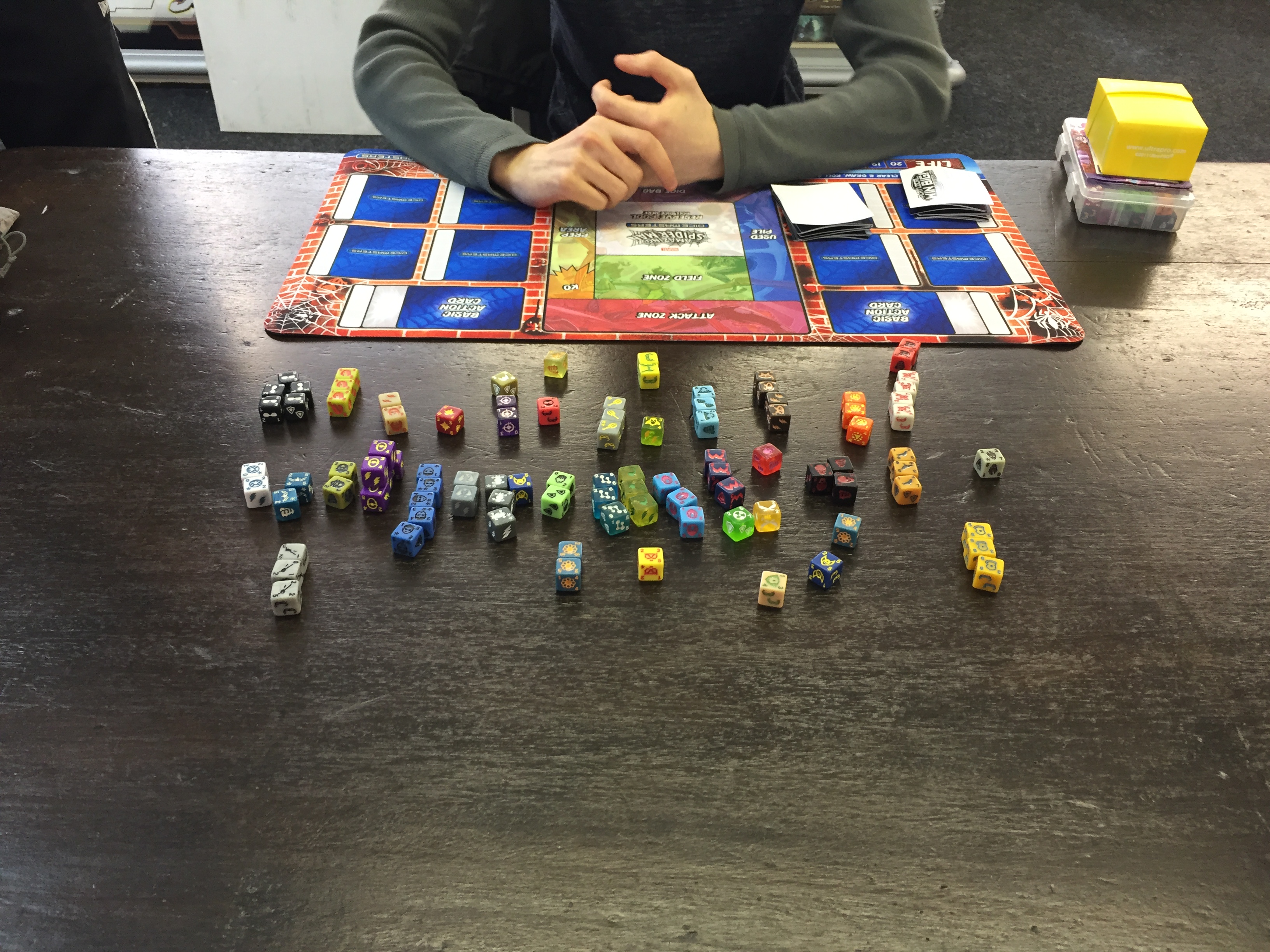 So, after drafting for the Marvel Rainbow Draft 2 in the earlier part of the day, we took a short comfort break and got stuck into the DC prize draft.

Due to stock availability we drafted with “Age of Ultron” packs for this leg of the draft. We were going to follow the same format as the first draft: single game, 30 minute rounds.

Even though things had not gone do well for me in the first event my enthusiasm had not waned for the second part of the day’s Double-Bill, although, I’ll admit, I was wary of drafting with the “Age of Ultron” set as, like “Uncanny X-Men”, I was less experienced with those cards.

In any case, I dove into the draft and sought some Win Con potential. 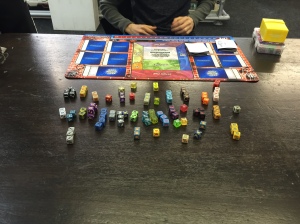 One of my first picks was ‘Enchantress – Amora’. She was a bit price-y, but I figured the likelihood of seeing Avenger affiliation dice on my opponent’s teams were pretty high with a set like “Age of Ultron”.

I also grabbed a ‘Spider-Woman – Jessica Drew’ in the hope I could throw some cheeky unblock-able damage across the table.

I was struggling for some general utility support like removal, ramp, and broad Defense. The best I could do was ‘Wonder Man – Ionic Energy’ (I liked the Used Pile KO tech), ‘Gamora – Assassin’ (to KO any nasty attackers), and ‘Phil Coulson – Inspirational Leader’ (as a cheap die to use for ramp, plus he is handy with Sidekicks).

Next up I grabbed ‘Loki – Agent of Asgard’. I thought a bit of sweeping damage might be useful, even though I was short of bolts to use, plus; he was a rare I was missing from my collection!

I finished off the team with a ‘Giant Man – Dr Henry Pym’ and a ‘Captain Marvel – Maj. Carol Danvers’. They were really the best pick of a bad bunch. ‘Giant Man’ has some pretty great stats at lvl 3 for his cost and ‘Captain Marvel’, if she came out, might have given a little bit of ramp.

For the Basic Actions I stick with the pair I used in the Marvel leg: ‘Superhero Registration Act’ (for a bit of ramp) and ‘Betrayal’ (to punish my opponent of they wall up)

Here’s how the team got on…

I faced off against Jeff again in my first round. I couldn’t really tell you much about Jeff’s team except for two cards: the BAC ‘Power Bolt’ and ‘Kang – The Conqueror’. 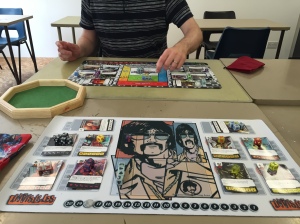 I was so slow on the uptake it was embarrassing. I was still in processing mode after the draft trying figure out a meaningful buying order to get something going with my own team I failed to pay proper attention to Jeff buying up his ‘Power Bolt’ die.

When ‘Kang’ hit the field the real trouble started. While I was still fiddling about with ‘Super Hero Registration Act’ and buying up ‘Giant Man’die Jeff used his extra re-roll from ‘Kang’ to secure his character faces on his Sidekick dice and to begin softening me up with a few single ‘Power Bolts’.

Once his field was walled up with seven Sidekicks (meaning they were out of rotation) all I could do was watch as a guaranteed three ‘Power Bolt’ die a turn came out the bag & zapped me for six damage. ‘Kang’ helped make sure any missed rolls were rectified and the  Sidekicks proved sufficient fodder to handle any attacks I may have got around to.

I took eighteen damage over three turns from ‘Power Bolt’, which was enough to finish me off.

I’d lost my first round.

Next up was Rhys, who had built a “Guardians of the Galaxy” affiliation-centric build, with a sprinkle of interesting, low cost cards for some added flavour. 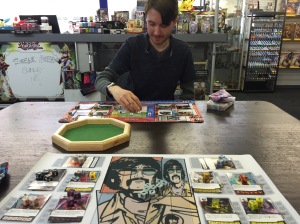 The main offensive drive of Rhys’ team was ‘Rocket Raccoon – Blam, I Murdered You’, ‘Star-Lord – Reluctant Prince’, and ‘Starhawk – Stakar Ogard’ for a solid Guardians of the Galaxy synergy, ably supported by ‘Black Widow – Oktober’.

In the earlier rounds I got a few cheeky unblock-able hits in with ‘Spider-Woman’, who was able to sneak comfortably past Rhys’ sidekicks. But as soon as Rhys got his ‘Rocket Raccoon’ die out on higher levels that strategy ground to a hault.

The real MVP of this round had to be ‘Pepper Potts – Personal Secretary to Tony Stark’. The defensive bump she provided was a nightmare to deal with. Any attacks I made were going to be pointless: Rhys was walled up to the max and with ‘Pepper Potts’ boosting everyone’s defense my rare ‘Gamora’ removal strategy couldn’t get me anywhere.

The mega-pumped ‘Rocket Raccoons’ relentlessly attacked with some brutal game text support from ‘Black Widow’. Eventually, my forces got whittled down as I failed to re-roll them from the Prep Area and then, in one crucial turn, couldn’t afford the fielding costs to get enough characters out. I was left vulnerable with a weak field, and a handful of ‘Rocket Raccoon’ die walked over for lethal.

My third and final round was against Adam, and during the game I mostly saw his ‘SHIELD Agent – You’re Not Cleared for That’, ‘Hawkeye – What Kind of Arrow?’, and an ‘Ultron Drone’ (I can’t remember exactly which one) 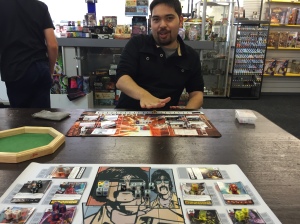 I tried a different strategy this time. After rolling quite a few Sidekicks in my first few rounds I decided to grab up ‘Phil Coulson’ to pump up my wall. I also grabbed my ‘Betrayal’ dice super quick before Adam picked them up.

It was a pretty straight forward round for me from there on in: the wall of Sidekicks kept Adam’s own guys at bay and my ‘Betrayal’ die did the work of bringing lethal damage. I sat tight and waited for ‘Betrayal’ to rotate back around and deliver its blows – each time it be was rolled there was a good five or six damage to be done, plenty enough to finish the game after a few rounds of good hits.

I had won my third round.

So, there it is, the Rainbow a Draft at GTG Hobbies in Stoke. I came in third place overall and walked away with some participation swag and an alt-art Guy Gardner.

This was the first of three Rainbow Drafts taking place over the coming that I intend on going to so watch this space for more word on those.