I headed down to Fanboy 3 in Manchester last Sunday to participate in their Rainbow Draft Weekend Double-Bill event.

There was a reasonable turnout with seven players total. It was nice to see a handful of the guys had travelled to take part: Ben Heys, who was a relatively new player, had headed down from Hudderfield and it was a pleasure to see Ben Said Scott & Joseph again, who had travelled from “daan Landun” way to play. (Ben, you’ll recall, went on to win the UK Nationals this year – check out his special guest blog posts on that subject HERE, HERE, and HERE.

The atmosphere was warm and there was lots of friendly banter going around. Everyone was relaxed and in good spirits as we waited for the event to start. A few guys did some trading and there was generally chatting/ice breaking going on for those who had not met before. It spoke to everything that is wonderful about the game’s community.

We drafted with the “Civil War” set and all Basic Actions were permitted.

I have decided now, after recent draft performance, that this part of the Rainbow Draft experience is most definitely not my strong suit! I’m just going about drafting the wrong way, I think, and need to re-visit some of the old Reserve Pool articles and past pointers I received. After reading my draft outline you’ve got some feedback I would welcome it with open arms.

Anyway – on to the actual drafting…

I had a ‘Songbird – Reformed Villain’ in one stack and ‘Nitro – Stamford Incident’ in another, so I decided these were going to be my first picks as an unblock-able offensive force.

I was going to need some Thunderbolts for ‘Songbird’ to work so grabbed a few ‘Punisher – Unlikely Ally’ cards. I also figured I could make use of his Intimidate gametext.

A ‘Black Widow – Mistress of Pain’ got passed to me and I snapped her up. I knew she would make a potent card for blocking and, as an added benefit, she was a Thunderbolt too. Sadly, she was a popular card and I only managed to get one in the end.

Sidekick walls had been a challenge in drafts I’d played before so I snapped up some ‘Venom – Spidery’ to make it more difficult. Once again – ‘Venom’ is a Thunderbolt to support my ‘Songbird’ strategy.

I wanted something bigger & more muscle-y in the back pocket so picked up a ‘Taskmaster – Monkey See’. Admittedly, the fact that it was a rare I was seeking for my collection didn’t hurt. I’d been on the receiving end of some ‘Taskmaster’ jiggery pokery before and thought it would be fun to try out myself.

Options were starting to become limited so I filled up the rest of the team with a couple of other Thunderbolts: ‘Bullseye – Peanut Projectile’ (not the best of choices, but may prove useful in a pinch) and ‘Moonstone – Ms Marvel. (My memory was failing me but I wondered if there was some “when fielded” or “when attacks” effects worth protecting against in this set).

For Basic Actions I went with ‘Transfer Power’ and ‘Banishment’. I wanted ‘Transfer Power’ for it’s stat swapping global to potentially mitigate some of the lower attack values on ‘Nitro’ and ‘Songbird’ on their level one & two sides. I chose ‘Banishment’ because I find it a fun card to use.

So there was my team – essentially a Thinderbolt theme team!

Here’s how the rounds went…
Round One – Loss

My first round was against Ben H. The main cards/dice of his team that I saw were ‘Justice – New Warrior’, ‘Moon Knight – Avatar of Khonshu’ and ‘Hercules – The Incredible Herc’. 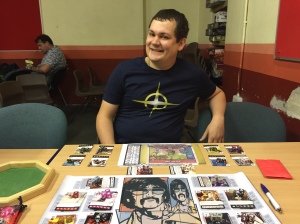 I knew ‘Justice’ was going to be an issue so I bought up a ‘Venom’ in the hopes of slowing down his Sidekick purchases. It was a vain attempt: Ben got two Sidekicks out by the second turn, long before ‘Venom’ showed his ugly face, and they camped out all game pumping up that ‘Justice’ from the get go.

I got a few good ‘Nitro’ hits in here & then but, as the ‘Justice’ onslaught came turn after turn, my character count was slowly whittled down time & time again as I failed to re-roll them and had to hold back my ‘Nitro’ die to serve as blockers.

We chipped away at each other here & there with my ‘Black Widow’ holding the line whenever possible and the occasional ‘Songbird’ sneaking through with some ‘Punisher’ support.

Eventually though all was lost when ‘Hercules’ turned up on a turn where I failed to re-roll ‘Black Widow’. An all out assault by Ben, Sidekicks n’all, was enough to land lethal.

My first round result was a loss.

My next round was against Aris, who had constructed a team from which I mainly saw ‘Deathlok – Death Machine’, ‘Namorita – New Warriors Found’, and ‘Falcon – Aviary’.

With some early ‘Punisher’ intimidating shennanigans and unblock-able ‘Nitro’/’Songbird’ attacks I took a small life lead quickly, but as soon as ‘Deathlok’ arrived everything ground to a halt.

What we then had was a weird Mexican stand-off: Aris was holding his ‘Deathlok’ die back as the only character with a defense high enough to block ‘Nitro’, but I was holding ‘Nitro’ back (with some Shield energy in the pool for some ‘Transfer Power’ Global) to block ‘Deathlok’.

This went on for quite a number of turns as we both tried to get something together to shake loose the gridlock. I used my ‘Songbird’ and ‘Punisher’ die to play a long game and drive through some unblock-able damage with the ‘Songbird’ game-text.

It was too slow going though and at the point time was called I had 10 life and Aris 5 life. We played out the five rounds but neither of us could get the rolls or the combos together to get the finishing blow in the small number of remaining rounds.

My second round ended as a draw.

My final round was against Shaun, who had put together a team with a number of Fist energy characters and ‘Pym – Particles’ with the intent of winning through Overcrush damage.

Shaun picked up some ‘Ant-Man – Voyeur’ and ‘Jessica Jones – Aka Jewel’ die as his Fist based attack force and walled up with Sidekicks to hold his line.

I used ‘Black Widow’ to hold my own line against the Sidekicks and purchased my ‘Nitro’ to start a bit of my own Win Con.

Once again: Shaun & I found ourselves in the classic draft problem I’d faced all-day of wall Vs wall. We both were able to use our win condition strategy to get a little bit of damage through here & there but couldn’t line up the hallowed lethal swing.

Then Shaun pulled a blinder – I had completely failed to notice the ‘Powerbolt’ BAC Shaun had brought. Shaun purchased one up and it was just what he needed to break the gridlock.

With the ground already softened from some earlier light hits on me he was to use the ‘Powerbolt’ to time KO of my ‘Black Widow’ and put all his sidekicks and zero cost ‘Ant-Man’ & ‘Jessica Jones’ die back in the game. With one big swing he took lethal and ended the match.

I had lost my third round.

So, there we go, overall I finished up 0-2-1 and came dead last. Clearly I had some work to do going into the second draft of this double bill – watch this space for another post on that section of the event.

Until that comes in the next few days feel free to drop me a note in the comments sections below. Got a top tip for me to think about to up my game? How did my draft compare to the one you competed in? Let me know…