After a bit of a meal break we kicked off the second leg of the Rainbow Draft Weekend and commenced the DC draft.

We were to draft the War of Light set and were following the format used in the Marvel draft of single game, 30 minute rounds.

We dropped down to six players as Dante needed to rush off to get a train and head back home. We said our goodbyes and he wished us luck on the DC draft.

The mood and atmosphere was still immensely positive and the morning’s warm banter continued into the second part of our double dip event.

I found this a super tough set to draft with, mostly because it was the set I  engaged with the least when it was initially released. I was much more unfamiliar with the cards and found all my pre-draft reading up had largely just fallen out of my head.

In any case – I’d had a good morning on the Marvel draft, was playing much better than I had in other recent drafts, and wanted to continue doing well so I threw myself whole-heartedly into it.

The first card that caught my eye for my team was ‘Kyle Raynor ‘. One thing I did know about the set was that ramp solutions were hard to come by for some of the higher cost stuff so I snapped him up straight away. I also grabbed a ‘Jade’ for the same reason.

I saw there was a lot of ‘Indigo’ and ‘Munk’ die in the rainbow and, upon reading the cards, decided to grab up those guys – a bit of cheap muscle seemed a good way to go. With the pair of Purple Lanterns on the team I then decided to grab up ‘Atom’ – he appeared to be a solid blocker and had the discount synergy with the other Purple Lanterns to make some use of ‘Kyle Raynor’.

A ‘Lyssa Drak’ came my way so I grabbed her up. I was hoping to really get my hands on the Uncommon version (a card I had used in the Unlimited Constructed format) and could see the dice in the rainbow for her, but she never came around again (someone else was clearly after her too!), so I had to settle for the common.

I wanted some defensive capability so I grabbed some ‘Ranx’ for his double blocking game-text and his high defense value. With ‘Lyssa Drak’ on the team too I could make a little bit of use of ‘Kyle Raynor’ to cheapen him up a bit.

The eight and final character slot I filled with ‘Bleez’. As the draft went on I just ended up with a few as choice slimmed and thought it may help to have a cheap character with multiple dice in a pinch.

I was first up against Matt, who had the good fortune of pulling a SR ‘Starfire – Koriand’r’ in his draft and had picked up another couple of Teen Titans to support, most notably ‘Raven – Rachel Roth’. (Notably as she was who I saw Matt field.)

I very quickly came to realise that, even though I had made some pretty good draft picks with the Purple Lanterns, I was lacking a bit of edge to the team -something to drive that muscle through like some Overcrush or a board-clear solution. Matt & I were walled up pretty quick and, even though the combination of ‘Indigo’ and ‘Munk’ is a potent one I had no choice but to slowly but surely bide my time and just whittle away Matt’s defenses bit by bit.

Even then, this was a tough prospect and no real strategy at all – ‘Raven’ kept bringing the Titans back and ‘Starfire’ kept pinging me with her Direct Damage. Regardless, I kept sending my ‘Indigo’ die across in the hope they would thin the field and eventually my fortunes changed – following one of the rounds were I had managed to KO a number of his die Matt failed to re-roll the character faces to re-fill his field. This was the turn of luck and opening I needed: with a weaker field I had a lethal attack value in excess of Matt’s defense capability and managed to get him finished off.

I had won my first round.

My next round was against Shaun, who’s team I have largely struggled to recollect other than one key card: ‘Lyssa Drak – Future Sight’. 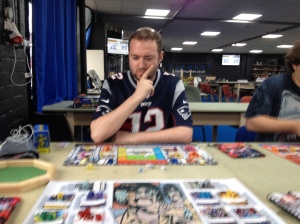 Shaun got his ‘Lyssa Drak’ die out asap and she swiftly became an enormous thorn in my side. I tried to use my life as a resource as often as possible, but this served no purpose as it just whittled down my life and, while it improved my own fielded dice count, helped me not at all because Shaun had his own wall to defend against me with.

I was in a challenging Catch 22; I needed to field characters to block Shaun’s attackers, but at a cost of two life a turn. The two life was better than the potential character damage I could be dealt, but it was essentially forcing me to kill myself slowly.

Eventually, my life count got so low it became a lose – lose situation. Once I was down to a life count where Shaun could drive an excess of combat damage through compared to my blocking capability he struck and it was all over.

I had lost round two.

My third & final round was against Simon, who had built a Blue Lantern with ‘Warth – Peace Be With You’, ‘Saint Walker – Bro’Dee Walker of Astonia’, and ‘Kilowog – Drill Instructor’.

I straight away noticed that Simon was playing with ‘Superhero Registration Act’ so, after winning the toss, I jumped in on that ramp action and pilfered them away from under him.

This turned out to be an incredible blessing: between ‘Kyle Raynor’ and ‘Superhero Registration Act’ I had more than enough spending power to buy up my holy trinity of Purple Lanterns (‘Indigo’, ‘Monk’ and ‘Atom’) and put a super strong field together.

Then it was all about shennanigans. I got my ‘Lyssa Drak’ out and started relentlessly attacking with her and ‘Indigo’ dice – using the ‘Lyssa Drak’ game-text to either force a block (and KO) of a die to make his team useless (‘Saint Walker’ can only attack & block if there’s a Green Lantern out, ‘Warth’ can only attack & block if ‘Saint Walker’ is out) or fill his bag with Sidekicks to keep his lovely purchases at bay. With this strategy I was also able to sneak a few excess hits in here & there whenever my attacker count was higher than Simon’s blocker count.

Eventually I caught Simon on a turn when the dice Gods decided to give him a dodgy roll as he failed to roll character faces on his KO’d dudes when he needed them. With Simon’s field thinned out I charged over to deliver lethal.

I had won round three.

I finished up on 2W-1L-0T, with Strength of Schedule ranking me in second place.

This marked the end of my run of Rainbow Draft Weekend 2 events. It had been tremendous fun playing Dice Masters all day at my three local FLGS’ and it left me with a great sense of anticipation for the upcoming Regional events.

Thoughts, comments, feedback or queries always welcome in the comments below.