Over December & January, as the competitive season wound down after the Fall WKOs, we decided down at my FLGS with the standing Tuesday night events to have a little fun and play around with some team building variants. A bit of a palette cleanser, if you will, for the handful of regulars who had been playing & tweaking the same teams over & over for a little while practicing for the WKO events.

The store was on board and supported the idea fully – continuing to provide prize support & WIN access with the simple caveats that I, as the Volunteer TO, had to be sure to note up events accurately and made sure players were well informed.

To keep it as interactive & engaging as possible I would regularly post updates on our store’s Facebook page describing the variants and then follow up with polls where the locals could vote for their favourites. 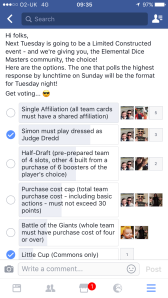 Here’s a breakdown of some of the variants we’ve been trying out and find ourselves enjoying – maybe you could give them a go yourself:

Pretty straight forward this one: all of the characters on your team must belong to the same Affiliation.

We’ve done a couple of these, and have played around with the house rules in a few different ways. One week we loosened up the Affiliation marker on the card to allow inclusion of obviously thematically connected cards (i.e. ‘Batarang’ on a Bat-Family team, ‘Cerebro’ on an X-Men team, or ‘Splinter’ in a Turtles team.) We’ve tried restricting BACs to ‘in set’ too. We’ve also like to separate the Villain Affiliation down the Marvel/DC lines

This variant works well for a couple of simple reasons:

1. at times the tribal focus of the game has created good synergies in the Affiliations, so the teams are pretty fun to play. Some Affiliations come in stronger than others (nobodies coming with an Arrow-Family team anytime soon), but there is a growing range of choice in single Affiliation team building that offers variety and could lead you to take another look at a less-frequently used card;

2. it totally appeals to the Nerd in me. It’s essentially playing out one of those badly written crossover specials we see now and again. It’s fun to play the Bat-Family and see how they fare against a team of D&D Monsters;

3. it makes the game more accessible to newer players or fanboys who were attracted to the game by their favourite IP, and who perhaps only have a limited collection or have chosen just to collect that favourite IP.

This was an interesting variant we tried out – we set a minimum point cap of 40 on the team’s total purchase cost.

I was unable to make this particular event (real life got in the way of my nerd life – work sent me on a trip) but by all accounts it was a fun event to play.

I asked those who played why it was fun and the feedback was interesting:

1. Like the Single Affiliation theme; this variant meant that they looked at less-frequently used cards differently. Specifically; the cap required the player to look at more higher cost characters than they would usually; 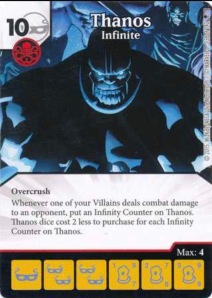 2. Following on from that – it meant the players thought differently about the fundamentals of team building, particularly about things like purchase power & ramp. For example; the ‘Swarm’ mechanic is great for building purchase power, but they are traditionally low cost characters, so how are you going to balance that up in your team construction. This meant we saw 7 – 10 costers not only in teams, but hit the table, not something we see often.

3. And, continuing the last idea once again; who wouldn’t have fun getting the big boys out that they wouldn’t ordinarily play with.

A bit more convoluted this one, and I believe we picked the idea up from a forum or podcast out there somewhere. The core idea is that each player prepared a four card, ten dice team for each of the four energy types in the game.

We then played shorter, single Elimination rounds (to get more rounds in and increase the variety) and rolled 2 sidekicks at the outset of each match. We then used the energy on that roll to determine which two ‘Energy Quads’ would be put together to make your 8 card team. A Wild gave you the choice of which quad to play, a sidekick gave your opponent the choice.

Why did this one work? I’m glad you asked:

1. Once again, it re-invigorated the joy of the team building element of the game by taking it off the rails and challenging us to think differently about team construction. The variety of combinations meant that cards you might not ordinarily look at to face certain terrors we may face on the other side of the table.

An example; I rely (as many of us do) on ‘Constantine – Hellblazer’ for protection against ‘When Fielded’ effects. But in this format he can only feature in the Shield Quad, and what if I don’t roll that when quads are chosen? But if I load all quads with alternatives (such as ‘Batgirl – Commish’s Daughter’) am I losing other valuable space.

A wonderful test of team brewing;

2. The random selection element of the Sidekick roll to choose your team meant that, even more so than ever, no two games were repetitive.

When building the four mini teams there would be a wider range & variety of strategies/combos possibly to play, and so there was lots of fun in trying out these different synergies game from game, and taking your team ‘off rails’ as you had to think about different approaches from match to match.

So, there we go, just a small example of some of the themed, limited constructed formats we’ve been playing around with lately.

Lots of stores do this and I will be published some further blogs on the subject in the coming weeks. If your looking for some ideas or inspiration then perhaps you’ll want to take a look. Keep watching this space.

In the meantime; why not drop me a line or jot a quick comment in the ‘Comments’ section below and let me know what your favourite themed format is?