Hey folks – seems like there was some more spoiler-y goodness do the rounds over the weekend as an article on the upcoming Batman set in Game Trader Magazine hit the ‘net.

You can find the relevant article online HERE.

It’s frustrating that the set has been pushed back to May and we’re getting previews so soon, but I’ll take what I can get, I love me a good spoiler one way or another.

These dudes leapt out at me for a number of reasons.

First; that global on ‘Darkseid’. It’s almost an interesting cross breed of ‘Professor X’ and ‘Rip Hunter’s Chalkboard’ global abilities, essentially bringing the core of their role in a team into a one card solution. It costs one generic energy and preps you two die, one of which could be the die you’ve just purchased.

Second; in his main text he’s clearly got synergy with the ‘Parademon’, who we haven’t seen but who one version of which is referenced in the text of the article as “Parademon: Strength in Numbers allows a player to draw additional dice using Swarm and deal a point of damage to their opponent at the same time.”

I suspect the ‘Parademon’ will be a low purchase cost character, perhaps as low as two. If that is the case then think on this: we’ve got a swarm character who deals damage to my opponent (I suspect ‘when fielded’), who I can prep first turn with ‘Darkseid’ global, and then recycle at my heart’s content with the sacrifice option on the ‘Darkseid’ game-text, which is refilling my swarm machine & direct damage machine, as well boosting my draw next turn! Whew! If the ‘Parademon’ turns out to be a Villain too, then I’m gonna throw a ‘Blue Beetle – Jaime Reyes’ in and really turn it into a party!

I like the look of these two upcoming cards very much – finger crossed the ‘Parademon’ is all I hope it to be. 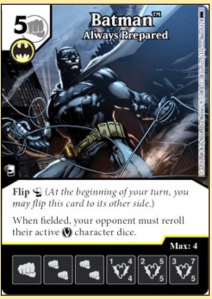 The flip side, referenced in the article as: “when a Batman die is now fielded, your opponent must reroll all of their non-Villain character dice” , was the real attention grabber. This dude could seriously change the board state in your favour for a big offensive swing, or to clear down an opposing force that’s started to look threatening.

Mister Miracle – Show Must Go On

I’ve been toying about with Basic Action driven teams for sometime now, most recently a direct damage strategy using a ‘Lady Deadpool’ & ‘Storm’ from the latest set, and here is another angle on it to play around with and enjoy.

The new ‘Boomerang’ mechanic is interesting to say the least. I’ve used Basic Action recycling tactics before with Age of Ultron’s rare ‘Baron Zemo’ and the Doctor Strange pack’s ‘Scarlett Witch’, but whereas these came at a cost and guaranteed the recycling, this is free, automatic, but only has a 50% chance of succeeding.

I’ll certainly be playing around with it and seeing whether it tickles my fancy more or not for sure, and eagerly await more sight of other ‘Boomerang’ cards.

These three (technically four) were my top picks from the preview, but I largely liked everything I saw in the article and am excited to see more from the set, although, as mentioned earlier, a little frustrated at the postponement of the release date.

In the meantime: what are your stand outs from the preview? Any thoughts on how you might use some of these? Let me know in the comments below…