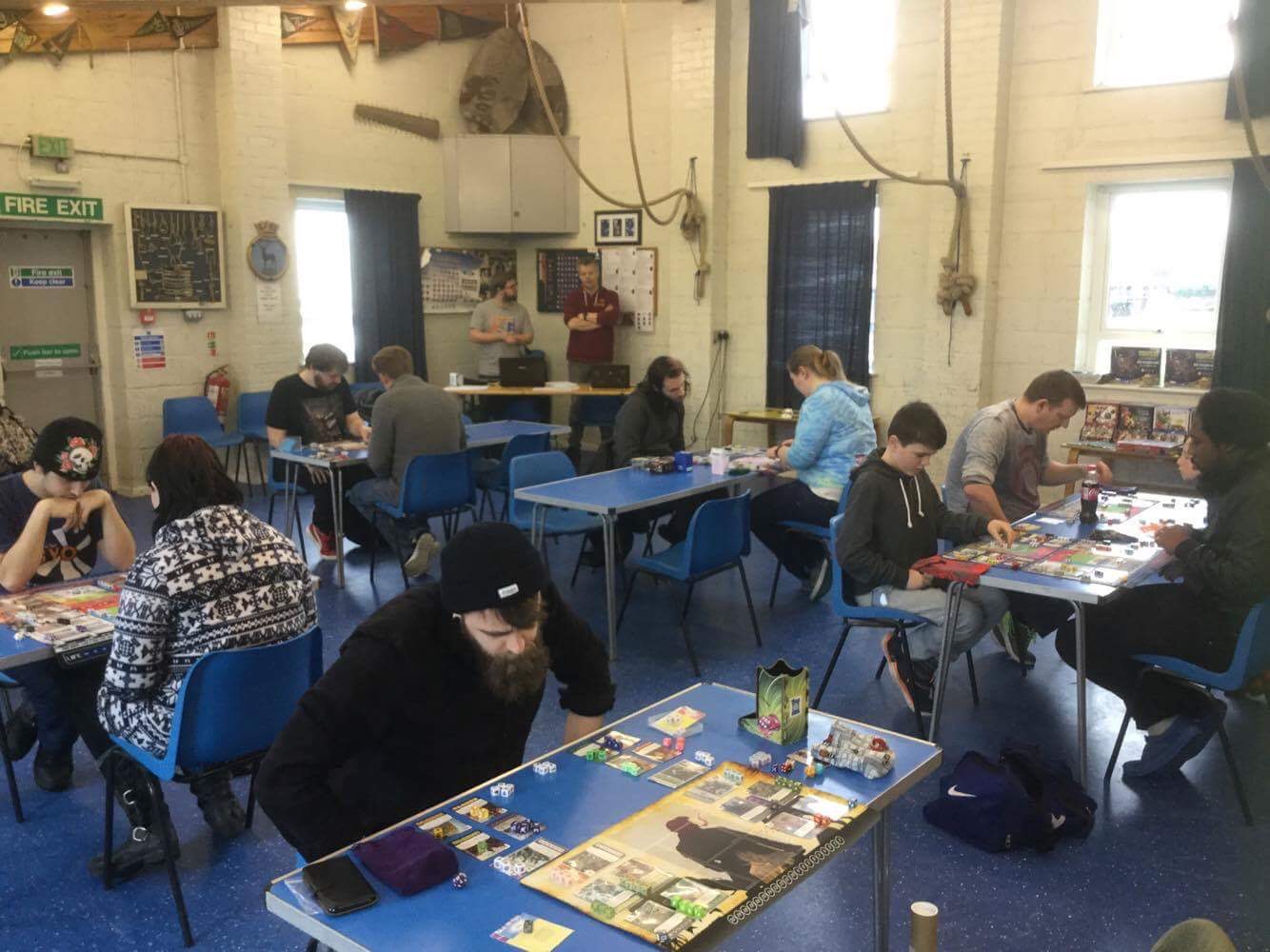 WKO season is once again upon us.

Friend of the blog & UK Nats Champion 2016 Ben Said Scott was in attendance at the first U.K. event of this season, which took place on the South Coast in Brighton and was hosted by KD Games. Ben has been kind enough to write up a Special guest post with his re-cap of the day for us all to take a look at. (I, sadly, was unable to get to the WKO myself – being a Dad can be hugely inconvenient when it comes to my amateur Dice Masters career!)

Ben took the top spot at the event, and in this article you’ll find Ben’s breakdown of his winning team and an overview of his matches on the day.

For a while now I’d been running an Ultraman based team using End of Days and Heroic Defence as a way to gain insane amounts of health back. After seeing the power of some of the Battle for Faerun Beholder teams, I knew that keeping End of Days in my team would be a good means to stop those. I also really liked the idea of using Frontline as a way to win. 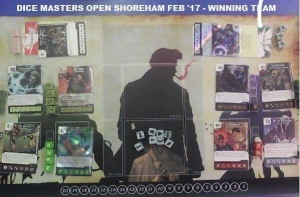 With Ultraman, Kryptonite, End of Days, and Frontline as my win condition I needed a way to get rid of the solitary blocker that my opponent would be left with after hitting them with End of Day’s. I looked at Nitro, and Solomon Grundy, to KO that character, but eventually decided that Rarecrow was the way to go. Using hum enabled me to not only get rid of the remaining blocker, but would also give me another attacker for my own team.

The next step was ramp. I was a bit wary of using PXG what with prevalence of both Oracle and Elf Thief. Instead I’ve been using Blue Eyes White Dragon and Rip Hunter’s Chalkboard globals in order to get the characters I need when I need them: I use them in my turn (no energy for the Elf to thieve) and could use my Kryptonite to get around Oracle . This has been working pretty well, and BEWD also gave me the ability to trigger Rarecrow whenever I wanted.

With Ultraman and their character I would need a way to guarantee some other characters on my turn. Initially I was using the Steel with Iron Will, in order to survive the End of Days trigger. However, Steel is a bit expensive and doesn’t offer me anything else. So I came up with Squirrel Girl. SG gave me the ability to get characters whenever I wanted. This worked for my win con, a defence against a Bard with Imprisoned (after they take your characters, you can still field the squirrels for defence), and it can also give you some BEWD fodder. 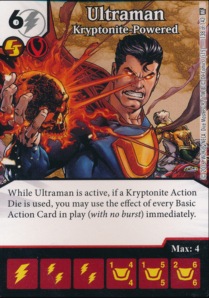 Finally; the go to two cost characters of Elf Thief and Constantine are so strong and well documented that I threw them in there to give me some options when going first.

The buy order was dependent on whether I was going first or second, but mainly it was to get SG out on the field as quickly as possible. From there you can go about getting out Scarecrow and Ultraman. RHCG them in as soon as possible. You can buy Elf Thief and Constantine as and when you need them, but don’t buy Kryptonite until your board is set up and ready to go. You need to make sure that you don’t get caught filling your bag with too many things.

The event was hosted by KD Games, in a hall they rent out for occasional gaming weekends. The turnout was 18 people, almost double the attendance from last year’s WKO on the south coast. Because of numbers there was a 4-round qualifier, before the cut to top 8. It was an all-around great event, with plenty of time for one-shot draft events, and a sensible and fair TO.

The opening four games were all against tough opponents. Three of the four ended up in the top 8, with one other just missing out. First up I played Olly, who sought to use the Zombie Gladiator and the rare Mary Jane to do huge amounts of over crushing damage. Unfortunately, Olly hadn’t had a lot of experience playing against Hellblazer and I managed to stall out his ramp (he was using the global Beholder to trigger Villainous Pact and Resurrection). Having done that I could set my own win condition up and running.

Second, I played reigning UK draft champion Charlotte, she’s a really fun person to play against. She had a strong Mask Ring combo set up, looking to wreck my ramp using Oracle and Elf Thief. Both games were close, and on a few occasions Charlotte had the ability to win if she had rolled out enough masks to hit me for 20. Luckily she didn’t and I was able to hit her for critical.

In between the second and third games we managed to play a Deadpool draft, which was just a quick-fire game. Charlotte managed to pick up a super rare Lady Deadpool, and everyone managed to fill out some of their collection. Shiny cards are always a bonus. 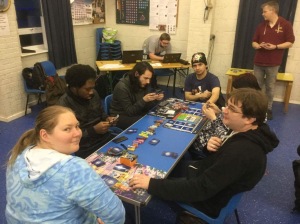 Into the third game and I came up against Chris. He was using Hulk, Medusa and Lockjaw to control the field, while winning with Firestorm and Gorilla Grodd. Like Olly, Chris was a relatively new player and could have attacked more with Firestorm to get through for some early damage. He didn’t and it worked out pretty well for me. The last group game was against Andy. Andy is one of the best players in the UK and his use of Beholder and Bard was frightening. I managed to win the first game with my Rare-crow stealing his Bard. I lost the second game, having all my stuff Imprisoned and Bard killing me. However, with my End of Days discouraging his Beholder usage, and the threat of me stealing his Bard dissuading him from leaving that on the field I was able to shut out the third game because of a miscalculation from Andy.

This meant that I was through to top 8, having only faced one Bard and it still felt pretty competitive.

Into the quarter finals; I was drawn against Charlotte again. Unfortunately this time the national drafting champion knew that stopping me targeting, using Raven, would effect both my Kryptonite and Rarecrow. This slowed me down substantially, however adding the extra purchase into her buying order also slowed her Lantern Ring team down. Much like the first match though Charlotte just failed to get enough masks out to do enough damage. Charlotte was a brilliant opponent and I think she was happy that she could then drop out and do some more drafting. So, during the semi’s and quarters we had two draft pods going alongside, which kept the good vibes form the event going.

The semi-final was against Phillip. He was running a Bard/ Imprisoned team. Buying up his Imprisoneds would have been futile because of he had Mana Breakers so I simply tried to outpace his team. When your opponent has Imprisoned you don’t need to go for Rarecrow, instead you can just get out enough Squirrel tokens to win. That’s what happened in the first game. In the second game Phillip changed tact and killed his early ramp in order to get out Zombie Magneto in order to wreck my Squirrel Girl plan. Luckily Z-Mags doesn’t stop Kryptonite, so I used that to protect my Squirrel Girl when she was out, and I managed to get out Ultraman out and swing through.

The final was up against Andy again. The first game was really, really close. We both brought Imprisoned’s, and I managed to get two. However, Andy kept avoiding my Imprisoned’s by using BEWD to KO the characters he didn’t want to get captured. However, Andy miscalculated and fielded all his characters thinking he could win, however I had some Squirrels I could bring out to protect myself, and next turn I was able to capture the majority of his field. The second and third games went much quicker. Using his Parallax global Andy managed to get a load of sidekicks out turn three, as well as Bard and a Thief. Enough to swing through. The second game went much the same way but in reverse. Because we both had Frontline my Ultraman triggers gave my characters +6 attack each, this meant that I only needed to but Kryptonite, Ultraman and one other character to win. This happened pretty easily thanks to a bunch of sidekicks rolling when I needed them to and I swung through.

The prevalence of PXG in the last round of WKOs seems to have dissipated a little bit. There was a lot more of RHCG, Resurrection, and Villainous Pact. This was so that you could use globals on your turn, enabling you to use things like FUS Beholder, Spray, or Kryptonite to enable you to get maximum value of from your energy. This led to me very rarely using my Elf Thieves, and Oracle having much less of an effect. RHCG and BEWD is definitely a strong ramp/ churn option, one that I will be including a lot more as we get into other competitive tournaments.

Around the room there was also a definite resurgence of Hulk in both Green Goliath and Jade Giant form, this was mainly because of the success of Hulk paired with Black Adam. This is a really powerful combo. Zombie Magneto is also an excellent counter to most teams. Without PXG, cheaper characters are much more likely to hit the field. Inversely, though, the main problem with both Z-Mags and Hulk is that they cost 6, and that is a hard reach for something that only protects you rather than wins you the game.

Anyway, those are my thoughts for the Brighton WKO, I have another two in the UK that I will be attending and I will be doing a write up for those as well. So any suggestions on how to improve this team, or what your thoughts on the general meta would be greatly appreciated.

There we are folks – I hope you enjoyed Ben’s overview. Please feel free to respond to Ben by commenting in the Comments section below.

Keep it Brit Roller Six for all your UK WKO2 coverage needs. 🙂