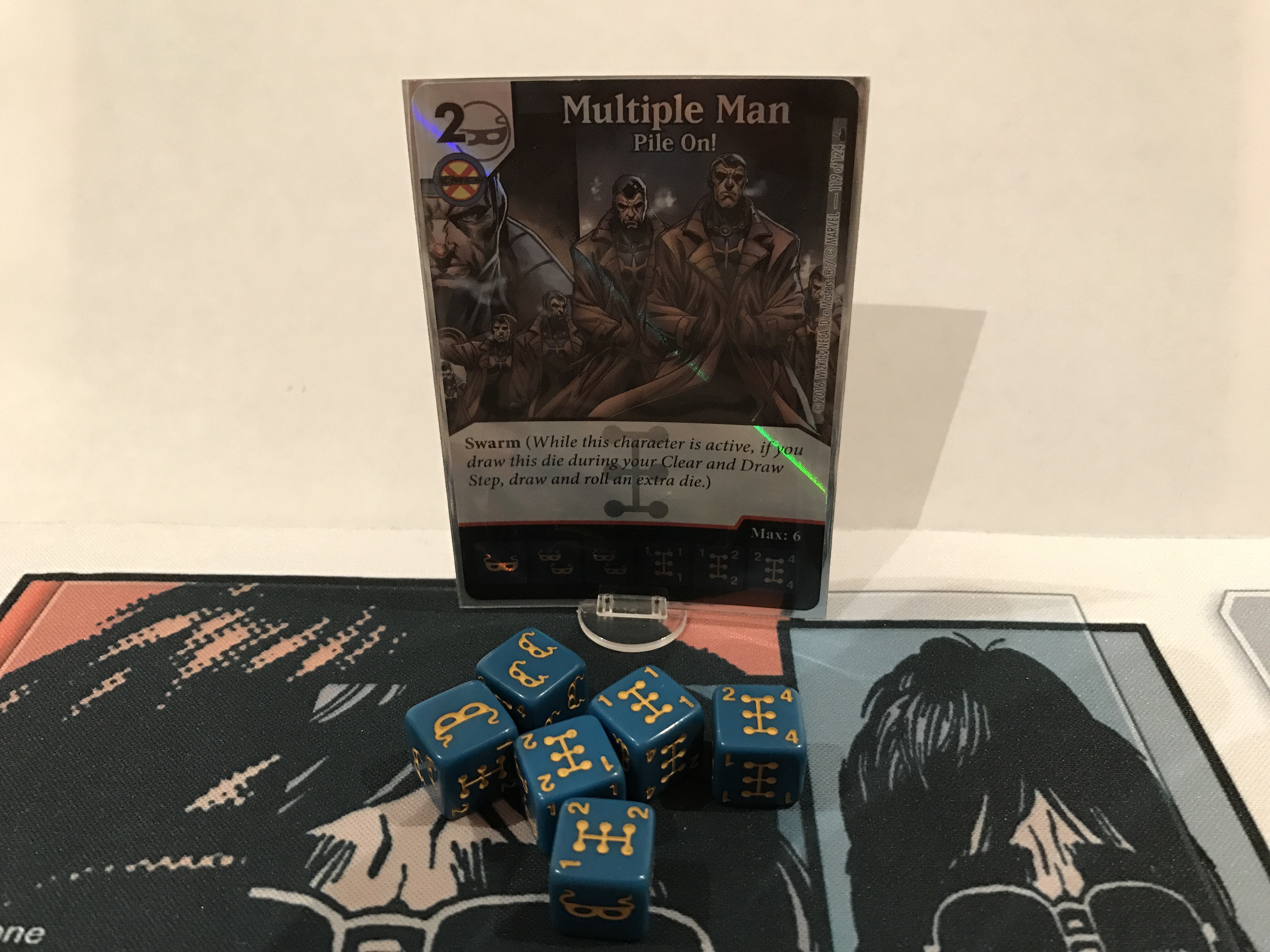 When the Deadpool set was released one particular card that caught the attention of the community & generated much discussion was the Super Rare ‘Multiple Man – Pile On!’

I’ve been playing with him quite a bit lately. I’ve used him in an X-Men team for a “Single Affiliation” event, in a rare ‘Colossus’ build, and in a Mask Ring team. I’ve developed a bit of a soft spot for him through this heavy use in recent team builds, but am somewhat aware from discussions I’ve had on Reddit and on The Reserve Pool’s forum that he is not as positively viewed as I see him.

This polar view was interesting to me, so here’s an overview of the key points of debate from both the SR MM fans and his detractors…

The first eye catching element of ‘Multiple Man – Pile On!’ is his Max Die allowance of six.

This is the first die in the game that has such a high allowance (the average is three) so he was bound to make waves when he came out. It’s not unusual for Wizkids to produce cards with amendment Max Die allowance, however historically we’ve seen them give a card a lower number than a higher number. (I’m writing this on a train with no internet connection currently, but the only other exception I seem to recall is an early AvX ‘Storm’ card that had a Max Die 5.)

This is a significant factor for a ‘Swarmer’ – it really boosts the ramp & churn potential of the card. However, some view this as a downside. Allocating Six die from your total allowance of twenty starts to limit your Dice distribution option throughout the rest of the team. It also takes a long time to get them all purchased up. (More on that later)

I’ve not found this to be an issue as there are plenty of cards I use that I would only place one, maybe two, dice tops on, but I can appreciate why this may create certain challenges for some strategies, especially at a more casual, local level.

Is ‘Swarm’ too slow?

I love ‘Swarm’ as a ramp mechanic. I’ve said many times before – I’ve always been wary of Action or Global based ramp because I don’t like that my opponent can use it and many people tech into their teams some Global hate. For example; PXG is rare in my teams, regardless of how efficient he is, because I seem to find that whenever I use him I either a. regret it because it helps speed my opponent up or b. get aggravated by the punishing energy tax of ‘Oracle’.

This is not the case with ‘Swarm’, and so a max die six ‘Swarmer’ was always going to appeal to me.

The thing is ‘Swarm’ takes much longer to hit pace to help ramp & churn, and the efficiency of the globals on cards like PXG and BEWD just can’t be argued with. The time it takes to reach the purchase power you need to put your lethal swing together is an enormous factor at the highest levels of competitive play. PXG especially is a ramp hand grenade, whereas ‘Multiple Man’ is like lighting a long fuse to some ramp dynamite.

Modern Age rotation may well shift the view here: the disappearance of cards like PXG and BEWD, with no real equivalent replacements in place, indicates that slower ramp may well be the future of the game.

The spoiled Super Rare ‘Darkseid’ from the upcoming Batman set would also hint at a more ‘Swarm’ focused approach to ramp & churn in the game design. Time will tell on that front…

There’s no denying it – the fielding cost of ‘Multiple Man’ is high and can create challenges to overcome. The two cost at his top level can be a particular pain point early doors as his fielding cost cuts into your purchase power to get things moving.

It does have some advantage though. For example; in a few recent games I’ve played his fielding cost has helped me weather the impact of ‘Imprisoned’ by placing my opponent in the tough position of deciding whether they want to capture ‘Multiple Man’ to disrupt my ramp or, as in one particular instance, grab my level three ‘Captain America – Super Soldier’ that was getting in their way.

I also believe it becomes a question of intent: if you are solely seeking to use ‘Multiple Man’ for Swarming up lots of energy then, in theory, you would only really be looking to field him a minimal amount of times (ideally once). If, however, there’s an intent to use him as a body for some purpose (like in a ‘Johnny Swarm’ team) then the fielding cost may well be too high for what you are trying to achieve.

‘Multiple Man’ on his level three face is quite beefy for a two cost character with 4 A and 4 D. (Although, admittedly, mitigated somewhat by his fielding cost) This can be tremendously handy when trying to keep him in the field to anchor the ‘Swarm’ mechanic.

I’ve played around with ‘Swarmers’ for some time, and one thing I’ve observed is that they are easy to KO. At top level ‘Multiple Man’ is just that little bit tougher to ping off: it’s just over the threshold of a One/two shot ‘Magic Missile’ or a ‘Captain Cold’s Cold Gun’.

Of course you actually have to roll him at lvl three. The odds are clearly increased if you manage to buy up six of his die, but Lady Luck always finds a way to mess with best laid plans.