The good folks over at The Reserve Pool got their hands on some preview product of the upcoming Tomb of Annihilation draft packs and we’re kind enough to share with a vid and some card scans. Woohoo!

Here’s a link to the good stuff:

As usually, I have obsessively pored over them and plucked out a handful of the spoiled cards that have caught my eye from a “first look” point of view. Here are some thoughts on some stand outs…

This one is just barmy, it leapt out at me straight away. 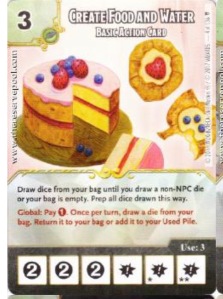 I had to re-read it a few times to make sure I really had the right gist of it. Keep drawing until something other than a Sidekick comes out or your bag’s empty? And Prep everything you drew? Just… wow.

Get your head around this right and you can achieve extraordinary things. I immediately started thinking about the shenanigans you could do pairing this up with ‘Rip Hnter’s Chalkboard’ global to time it just right, or keep your just purchased non-npc die out of the bag ready for some mad ramp next turn.

What it does mean, with just a little timing, is you’ll be able to guarantee one of your purchased die on the turn you use this as a best case, or pull a big sidekick roll for that big, muscle-y purchase.

And if it wasn’t awesome enough – it gives you a churn global too for one generic energy.

It’s a Basic Action; so you’ll be bringing it along for your opponent too, and will be victim to the popular ‘Scarlet Witch’ Action hate that seems meta right now, but I reckon there’s gonna be some clever brewers out there do some cool stuff with this one.

A 1 cost Bolt Swarmer was bound to catch the eye of a few people for sure. 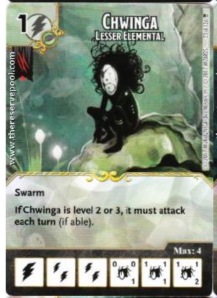 I’m going to have to think on this one; I’m not sure the effort to keep it in the field is going to be worth it to reap the reward of the Swarm – it’s going to need a secondary card to do something like spin it down (‘Mutation’ Global) or keep it from attacking (‘Blink Transmutation’ Global), which actually makes the 1-cost a bit of a false economy.

Still, there’s no denying the potent potential of being able to lay your hands on so much bolt energy so quickly, and I’ll be interested to see what evolves from the ‘Chwinga’.

This one goes on the list for sheer retro nostalgia. 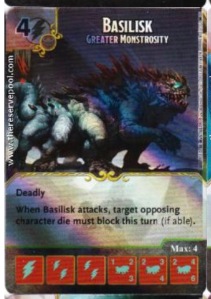 Nostalgia? Yep – this card just gave me a little chuckle as it reminded me of the old Thicket Basilisk/Lure combo that was meta prominent back in the days when I used to play Magic: The Gathering. (Probably gives any Magic playing readers some sense of how long ago it was I played referring to that combo).

This card has everything it needs rolled into its game-text. The “force block” mechanic paired with a ‘Deadly’ keyword is definitely a nice combination to give your opponent some pressure and tough decisions to make.

But mostly it caught my eye cause it’s old skool. LOL

When I read over the spoilers I’ll admit it was a bit of a toss up for me which of the revealed ‘Yuan Ti Pureblood’ Cards caught my eye more, but in the end I decided to hone in on this one. 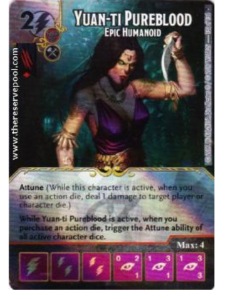 First; it’s an example of the new keyword ‘Attune’. Podcast listeners/regular readers will know I’m a sucker for direct damage strategies so this keyword was plainly going to be of interest to me. It sits in the same ballpark as the Uncommon ‘Boom Boom’ in the X-Men: First Class set and already, in just this short amount of time since its release, I’ve seen it be pretty effective, and I’ve no reason to think ‘Attune’ won’t equally pay off.

Second; the ability to initiate the secondary game-text and deal the ‘Attune’ damage of all such keyworded characters when you purchase the Basic Action as well as when you use it is just really attractive to me, especially on a dice that is so cheap to purchase & field. Plus; with it being Basic Action reliant you’ve got resource your opponent brings along too – giving a really healthy dice pool to dip into. I can’t wait to see how many ‘Attune’ characters there are in the set & what other game-texts they bring to the mix.

She’s not without her disadvantages, her defense stat is low (taking ‘Magic Missile’ and ‘Unstable Cannister’ off the list because of their Globals),  and its another powerful Super Rare Win condition to come out the woodwork, but she’s one I’ll be keeping an eye on.

There you go folks, a handful of my ‘top picks’ from the spoilers. There’s definitely a few others in there that seem juicy, so go along and take peek at the others for a peek.

Thanks again to The Reserve Pool for the spoilers and the card scans.

What do you think of these cards? Anything in the spoilers you’re particularly excited for?perhsps you disagree with my picks? Let me know in the comments below…