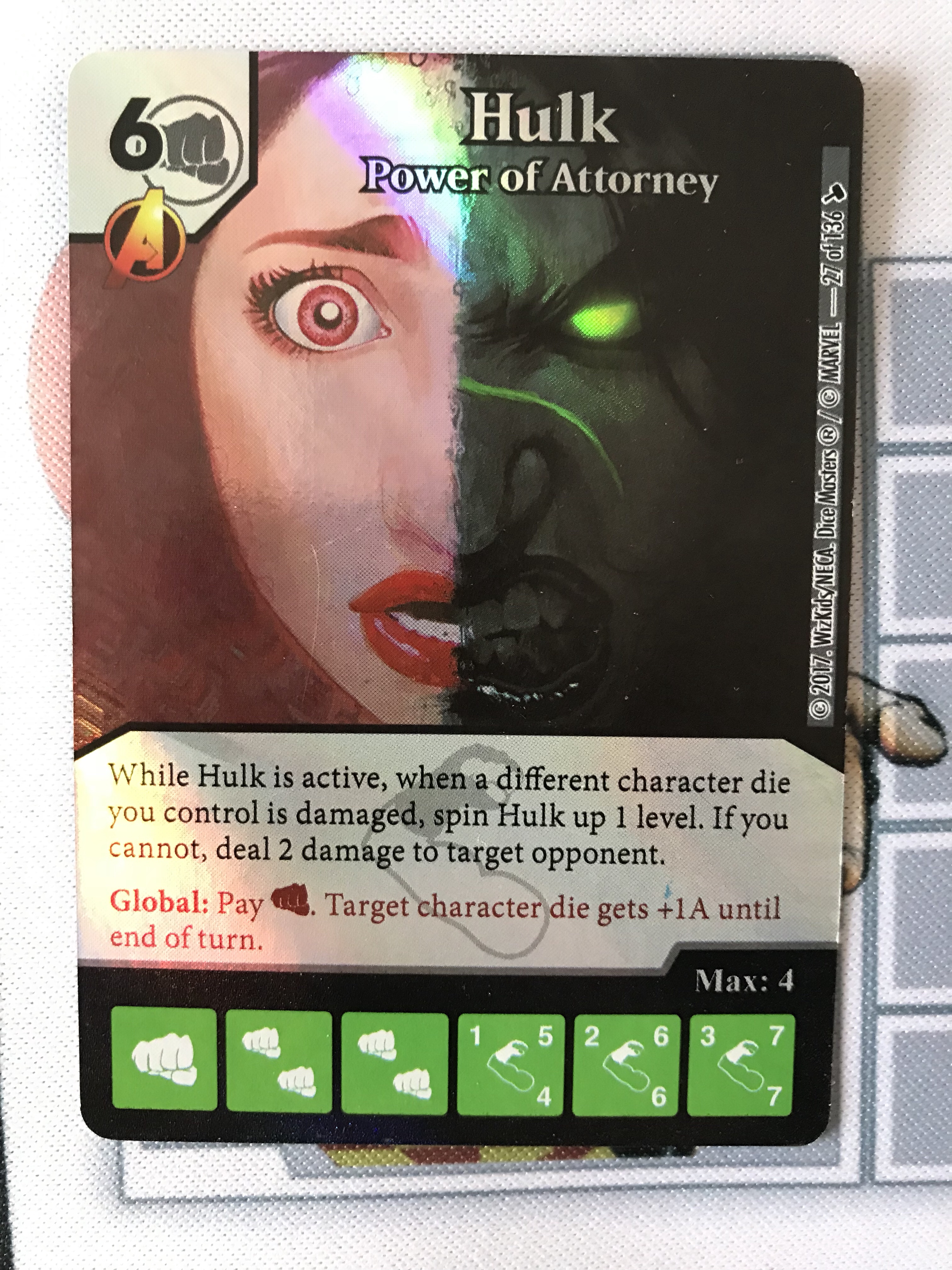 We held a ‘The Mighty Thor’ Set Draft event at my FLGS the other night. I’ve been writing lots of other Dice Masters content for a while I thought it might be nice to go back to basics and put out a good, old-fashioned re-cap instead of filling pages on the rotation LOL

We had six players in total and ran it as a three round Swiss. There was one feed of ‘The Mighty Thor’ Draft Packs so we split the feed and gave first and second place first dibs on purchasing the remaining two. We also had a Super Rare ‘Beholder’ with 4 dice for the top spot prize.

Here’s how it went…

Right out of my pack, the first card facing me, was the common ‘Hulk’, with a ‘Surprise Assault’ as one of my Basic Actions no less – I couldn’t believe my luck! 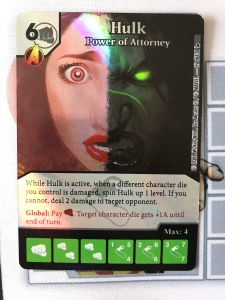 I’d heard from other players what a belter of a Win Con this gal made in Draft so I snapped it up straight away to form the team around.

My next pair of picks for the team were ‘Billy Club’ and ‘Daredevil’. This seemed to be a pretty potent combo along with the ‘Hulk’ – with the burst text on ‘Billy Club’ while ‘Daredevil’ was Active I had the potential to double up my damage each turn. 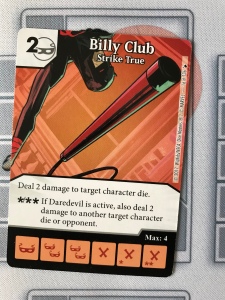 It could also prove semi-useful for pinging off any little annoyances on my opponent’s team. (Although it is just two damage – and cards in the Thor set do have pretty big defense numbers overall)

Then ‘Kate Bishop’ came my way. I had the ideal candidate for the ‘Billy Club’ damage.

On her first 2 levels the ‘Billy Club’ would KO her – cycling her to prep for some cheeky bonus ping damage. And, as it was a Direct Damage strategy I was working with, she had the added advantage of a pretty sweet global for some extra protection against some of the big nasties that were undoubtedly hanging around in a ‘The Mighty Thor’ Draft. 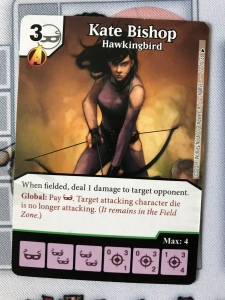 I needed some ramp, and I swear I must have been due some karma or something because in the next bundle I was handed there was a HXG himself waiting. (That’s the official terminology for ‘Heimdall’, didn’t you know?)

His global was just what I needed to help me stretch up to the 6 purchase cost of ‘Hulk’ for my win condition.

The remaining slots were most filler picks, but with a little bit of thought there. ‘Balder’ was going to be a recurring blocker if I needed some muscle for defensive purposes.

‘Karnak’ had a nice potential when buddied up with ‘Billy Club’ and ‘Surprise Assault’ for some dice removal if I needed it. 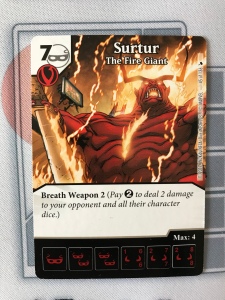 ‘Surtur’ was a stretch at a purchase cost of 7, but with little else that fit the team left I figured why not throw him in for that ‘breath weapon’ keyword and maybe clear some pesky Sidekicks walls.

I was pretty darn pleased with the team I’d managed to put together. The plan was pretty straight forward – use ‘Heimdall’ global in my second turn for an early ‘Hulk’ purchase, then ‘Big Entrance’ to expedite my damage actions, ‘Kate Bishop’, and ‘Daredevil’. Once the pieces were in place I would then rinse/repeat using ‘Billy Club’ on low level ‘Kate Bishop’ dice to ping away until my opponent was done for. Classic “death by a thousand cuts’ – the True Mister Six way.

Round One – Seth Fullwood

One of my regular foils: Seth had drafted up a Villain-centric team with cards like ‘Malekith’, ‘Wrecker’, and ‘Blackheart’. His plan was to turn his Sidekicks into Villains with ‘Malekith’, give them an extra bit of buff with ‘Wrecker’, and relentlessly attack. 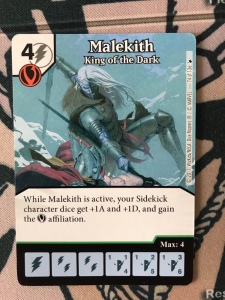 I stuck to my plan and ramped to an early ‘Hulk’ with ‘Heimdall’ and ‘Big Entrance’. She hit the field super quick and I was fortunate to roll her on level three right out of the gate.

I then set to grabbing my ‘Kate Bishop’, ‘Daredevil’ and ‘Billy Club’ Die to start my direct damage cycle off.

It worked a charm. Seth was very tentative with attacking while ‘Hulk’ was in the field but I was able to initiate the damage myself by slapping my own guys around with ‘Billy Club’. I also grabbed some ‘Surprise Assault’ die on the cheap with ‘Big Entrance’ to really maximise my damage potential.

Before long I was racking up 6 damage a turn with a decent wall of defenders (and ‘Kate Bishop’ global) to hold Seth at bay and dealt lethal after a few good hits.

The second game of the round went much the same way. Seth filled his field with Sidekicks but ended up relying on a handful of BACs he bought early on for buying stuff and was short of specific energy types to get his characters. By the time he got something together it had been too late and I had pinged him to death.

A first round win.

Duncan had built a team that was going to rely upon rotating around ‘Kate Bishop – The Archer’s Legacy’. By his own admission; not a great win condition. What Duncan did have was some nice characters that could run interference with my plans, specifically ‘Wrecker – Enchanted Crowbar’ and ‘Samantha Wilson – Project:Rebirth’. Duncan had already pretty much won the draft though: he had pulled a Super Rare ‘Earth X Machine Man – X-51’ which he was already super keen to try out in his ‘Knowhere’ team.

Duncan moved defensively right out the gate picking up ‘Wrecker’ to cut off my Globals (HXG specifically I think) and ‘Samantha Wilson’ so he could use her global. 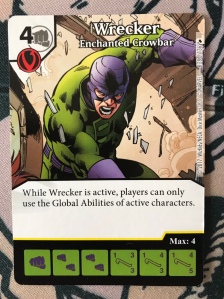 Thankfully though – an early HXG was all I needed to buy ‘Hulk’ and I moved into buying up my combo trio of ‘Kate Bishop’, ‘Daredevil’ and ‘Billy Club’ – which came pretty quick and cheap with the aid of ‘Big Entrance’.

I set to rinse/repeating my direct damage but was slowed down by a combination of rolling ‘Hulk’ on level 1 (therefore having to go through the motions of spinning her up for the damage effect) and then Duncan’s gratuitous use of ‘Samantha Wilson’ global. Nonetheless, with a bit of persistence I drove the damage through.

Duncan changed tact in the second game – knowing I was going to spend at least my first two turns on setting up my ‘Hulk’ purchase he proceeded to field Sidekicks and buy his cheaper characters to rush early damage through (making good use of the ‘Hulk’ global I’d brought along too!). It didn’t help that I then whiffed my ‘Hulk’ roll and for too many turns I had no characters in the field – I was at 9 life and running slow.

Fortunes turned though as my direct damage machine eventually fell into place. I had plenty of solid blockers now and a means to dish out some pain of my own. It was a bit touch and go for a minute but before long I had delivered lethal.

I was on top of the leaderboard and on my journey to winning the SR ‘Beholder’ and one of the remaining draft packs.

My third round was against Paul, who I recall had drafted ‘Thor – Warrior’s Spirit’, ‘Nick Fury – Commanding the Commandos’, and ‘Mjolnir – Whosoever Wields this Hammer’. His plan was to buy up his ‘Thor’ die and clear as much of my field as possible with ‘Mjolnir’, who would leave the ‘Thor’ dice standing ready to attack. 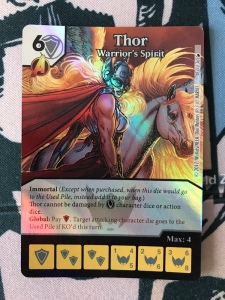 I ran through the routine that had worked so well for me in the previous matches, while Paul opened up by buying my ‘Surprise Assault’ BAC die in an effort to slow me down. While they would have been nice to have I still had my ‘Billy Club’ dice to buy and I was quite happy to let him damage my characters once ‘Hulk’ was out.

Still: it was a slow going game. I rolled my ‘Hulk’ on level one again so had to go through the motions of getting her spun up to level three. Paul, meanwhile, was trying to keep my field low with ‘Mjolnir’ but I had no level one characters by that point and he just couldn’t get it rolled on burst. 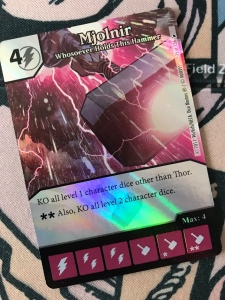 It took a while but eventually my ‘Billy Club’ rotated around slowly but surely to damage my guys enough to finally start dealing some ‘Hulk’ damage.

It was a one game slog of a round (pretty traditional for me and Paul) but I got there in the end.

I ended the event with a third win.

There we go then folks – I can highly recommend ‘Hulk’ and ‘Billy Club’ as a solid draft strategy.

I’m going to go away and see if there’s a nice Constructed team in the combo for casual play I reckon.

What about you guys – found any cool combos in a ‘The Mighty Thor’ Draft? Let us know in the comments below…