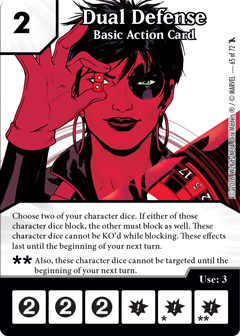 Wow! Easter Weekend has been mental busy on the spoiler front. The whole ‘X-Men Forever’ Campaign Box, ‘Uncanny X-Force’ Team Pack, and ‘Dark X-Men’ Team Pack were released over Good Friday from a number of sources, including this very blog.

Here they are, all gathered up in one convenient place:

All sets unboxing vid with DMArmada

I’ve been on a little Easter break with the family in West Wales so was a bit incommunicado when all the action was going on (I was in a complete internet black spot when our good man Jimmy over at Wizkids gave us the green light to go with our own batch – frantically messaging Andy “ARE YOU NEAR WIFI?” And waiting half an hour for it to send LOL) but I’m now in a more civilised location where an Internet connection is no longer a thing of science fiction – so I’ve had a good look over everything and have prepared a classic ‘True Mister Six” set of stand out picks from the new cards.

I’ve decided not to include any previously mentioned cards that have leapt out to me in earlier spoiler posts (Specifically this one HERE), and as always it’s just a “first instinct” thing where I’m just going off my gut from an initial look over.

So here they are then, my top picks, starting with the Campaign Box…

I can anticipate many uses to a card that allows me to manipulate my opponent’s blocking strategy, particularly a 3 cost one I can lay my hands on pretty quick and easy.

If you listen to the latest podcast episode you’ll hear we did a “Pick of the Week” segment in which I chose ‘Yellow Lantern Ring – Green Lantern Killer’ (You can find that Ep HERE) so a force blocking card like this that would combo well with the Ring was bound to catch my eye really as I’ve got it on my mind right now.

But he’s got more utility than that. Want to make sure your Overcrusher is blocked by the lower defense character? Then force the beefy guy to block ‘Beast’ at the same time and leave the weenie as your opponent’s only option. Need to sneak something through unblocked? Get everything else tied up with ‘ Beast’.

He’s not going to remove much with his lower Attack but, like I said; manipulating your opponent’s blocking strategy could lead to all sorts of fun shenanigans.

Next up is Banshee’s Brother Black Tom. 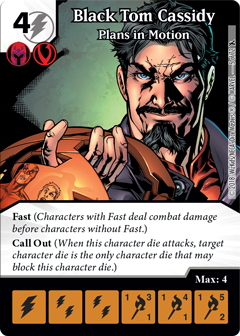 It seems to me that the two keywords ‘Fast’ and ‘Call Out’, particularly with those attack stats, could be a pretty potent combination.

In a meta where the options to remove pests on your opponent’s side of the table are often ‘When Fielded’, and therefore in a meta rife with ‘Madame Masque’ and ‘Wonder Woman’ Control, a removal option that isn’t ‘When Fielded’ could be super handy.

It’s not ideal – you can’t remove your opponent’s stuff in the main step to free yourself up to do some things, and your opponent might roll it back in on their turn, but like the ‘Beast’ above a card that interferes with your opponent’s plans when it comes to blocking and makes them roll their dice again and again is never a bad thing.

Cyclops – Present or Accounted For

He’s a stretch at the 5 cost, but well worth the dual set of benefits he’ll bring to any X-Men centric build.

Down my FLGS we quite regularly run “Single Affiliation” format so this ‘Cyclops’ is going to be a great addition to X-Men teams; I’ve got an eye on this guy to slot into my ‘Blackbird – SR71’ build to take advantage of that sweet stat bump across all my attacking X-Men.

Pair him up with a ‘Wolverine – Xavier’s School’ to make your X-Men cheap as chips and an ‘Xavier’s School – Home for Gifted Youngsters’ to get everyone at their maximum level and you’re looking at some pretty beefy X-Men to throw across the field at your opponent.

Next up we have a new twist on an old fan favourite. 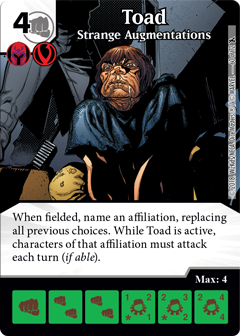 He’s not as all encompassing as his earlier version from ‘Uncanny X-Men’, and he’s got some painful fielding costs, but as a form of Control Removal this guy could be pretty decent.

We’ve all seen how ‘Force Attack’ Globals can be a handy way to take your opponent’s key pieces out of the picture in time for their turn, and I like the idea of not having to repeatedly spend on a Global to do it. It can be especially useful to disrupt your opponent’s ramp – name the affiliation of their swarm dice in the field so it’s not around for the draw, or name ‘X-Force’ affiliation and force them to keep attacking with their ‘Mimic’ and let him through to Used.

Pair him up with ‘Deadly’ characters or sweet when KO’d effects on your side of the table to open up even more sexy wombo-combo fun. Or pop him on a team with…

Here’s something fun to have a play around with.

The ability to ensure the survival of two of your key dice through your opponent’s combat phase can certainly prove useful. It’s a nice little counter to things like Overcrush (as the blocker needs to be KO’d) and Deadly. Having 2 rock solid, immovable blockers seems pretty decent too.

The Double Burst effect seems interesting too. In addition to preventing their death through blocking the added value that they cannot be targeted is pretty sweet too. It’s unreliable, but a lovely little bonus to have. I’m trying to remember if there’s a way to manipulate Action Dice onto burst face – maybe someone reading this can remember? Let me know if you can think of something.

And now onto the Uncanny X-Force Team Pack…

I love a cheap and cheerful bit of fun and here’s something I’m definitely going to be tinkering about with. 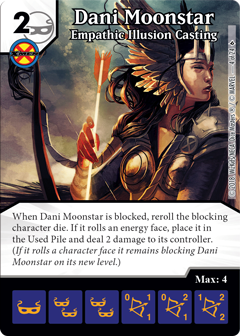 Here’s a 2 cost character with the aforementioned ‘Yellow Lantern Ring’ text built in to her game-text.

The likelihood that your opponent chooses just to let her through is high if they don’t want the risk of losing their characters, so I’m keen to try her out with some buff mechanics to pump up the Attack value to really apply the decision making pressure on my opponent.

I might try her out with the new ‘Energize’ ‘Deadpool’ that gives everything +1/+1, or the ‘Cyclops’ above.

It was tough to pin down a ‘Deadpool’ as a pick, but I know I wanted one so I chose this guy in the end. 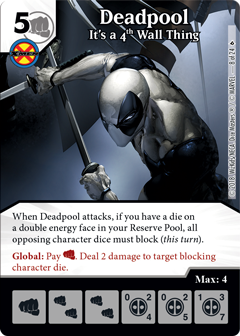 Like others mentioned in this post – this set really takes Combat shenanigans that messes with how your opponent chooses to block to the edge.

He’s a nice piece to pair with the new ‘Energize’ characters where you are intentionally trying to roll double energy in with them. The one that has particularly caught my eye to pair up with this guy is ‘Fantomex – International Art Thief’ who prevents all damage to your character dice.

Load up with Fist energy to spam that Global while you’re at it while your Rare ‘Sunfire’ keeps your guys nice and safe to add to your opponent’s pain.

Domino – Not Really A Party Girl

Now here’s a really juicy use of that ‘Energize’ keyword.

It’s no secret to podcast listeners/readers of the blog that my preferred win con style is direct damage, so this little gem was most definitely going to appeal to me.

Little pings like this soon start to catch up with your opponent left unchecked, and she’s cheap enough that you could pick her up nice and early and just keep spamming her game-text turn after turn.

It’s beautiful in its simplicity.

This may well be one of those “11th Cards” the old Double Burst crew used to talk about, but I like it nonetheless. 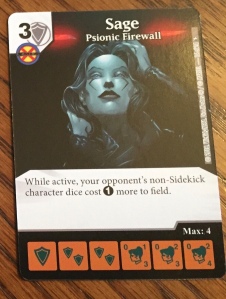 We’ve seen this text before on an ‘Oracle’, but she was overshadowed by her counterpart who impacted global usage so it never really got to be a thing, but with a slightly lower purchase cost, and some incredible fielding costs, this may just be the moment for this game-text to shine.

What I’m particularly interested in trying ‘Sage’ out with is board clear strategies. Traditionally large board clear effects are used to clear the way for a big One Shot kill, but I kinda like the idea of using board clear as a Control strategy while my ‘Sage’ is out to cram all my opponent’s dice into Prep then make them prohibitively expensive to re-field turn after turn.

One try for sure – she’ll probably end up just one of those dice I never buy or only use in casual play, but I’m going to give her a go and see what comes.

I’m a bit unsure about the ‘Corrupt’ keyword, but if I was to give it a go I think this will be the guy I test it out with.

It’s an interesting effect, there’s no denying it. From your own perspective this could prove to be a pretty useful way to churn through your bag to get to the useful stuff, and ‘Sunspot’ seems to be the best fit for doing it on demand when paired up with something like ‘Magic Missile’ Global or an ‘Attune’ character to give him a ping.

I also know that ‘Corrupt’ has caught the eye of ‘Tabaxi Rogue’ fans as a means of forcing your opponent to draw to set off the ‘Tabaxi’ ping damage – so one to watch out for in the meta.

It may also prove useful to disrupt your opponent’s own bag management. A well timed ping on ‘Sunspot’ and targeting your opponent with his game-text may just be what the Doctor orders to move that valuable dice of theirs back to the beginning of their bag rotation.

Time will tell – I think it’s curious and powerful, but I’m probably not canny enough a player to use it to its full potential. I’ll be giving it a go though and await better, more competitive players interesting attempts to make this work.

Ever been killed by a player throwing an unblock-able dice down the field at you then spamming the ‘Haymaker’ or ‘Excessive Force’ Global? Then here’s a card to consider…

If we look past the artwork to the game-text (is Wizkids getting a 15 year old male intern to pick some of the artwork lately?) then we might have a card that could be a boon in some situations.

If you’re own global use is low she may be pretty good an opposing slowing a team down. Ever seen anyone use ‘ Billy Club’ to energy fix a Side Kick then use new PXG to field another while using ‘Mimic’ ramp? I have. Ever seen someone ‘Clayface’ global in two fists to swiftly plough into their ‘ Kree Captain’ global? Yep, me too. Ever been had the wind taken out of your sails by a Force Attack global swiftly followed by a ‘Splinter’s Teaching’ global to kill one of your characters? You’re not alone.

Pair her up with ‘Blackbird – Under the Radar’ global for maximum control fun to restrict those key Globals before you get her out, then really disrupt when she does arrive.

There we are boys & girls – my first look picks from the new sets spoilers.

What’s caught your eye? Anything you are planning to play around with? Any good combo ideas with the cards I’ve suggested? Let me know in the comments below…