Back once again with a little something different for you all – a brief diversion away from our usual Dice Masters programming to bring you some more coverage of my wander around the UK Games Expo. I’m a little late getting this out due to my holiday, but things are still fresh in my mind as I fly back from the sun & sand.

I’ve already shared some key choices piccies of games from the Thursday night preview I attended (found HERE), and I covered a lot of ground Friday, so as I’m typing this on a plane right now passing time (did I mention I’m heading out on holiday?) I’m just going to pop a few of my general thoughts from the day and about the Games Expo down. Enjoy…

It Gets Bigger Every Year… 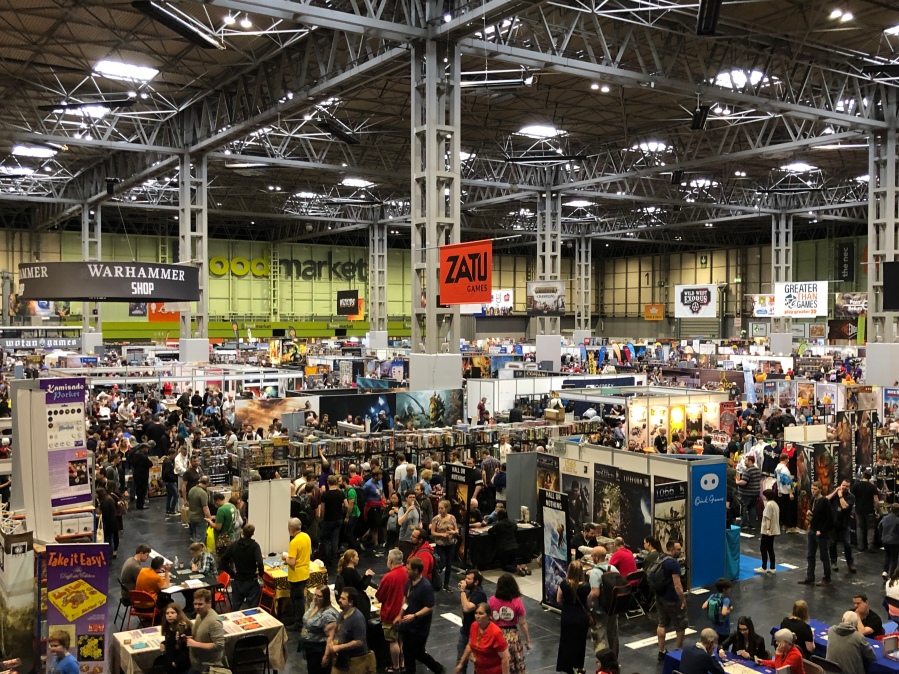 This is just one of three halls (and the additional activities & gaming space taking place in the Hilton Hotel) where the UKGE took place this year, with Hall 2 split between exhibitors/Organised Play and Hall 3 for Organised Play.

The first year I visited the UKGE it was in just one hall with the Organised Play events crammed into the conference rooms at the Hilton Hotel. In 4 years it has literally tripled in size with so much more going on than ever before.

One thing I feel has shifted (although, I’ll point out right now this is just a send of things, I could be waaaaaaay wrong) is that there is a much larger presence of the bigger game publishers year on year.

It also feels like it’s increasingly catering to the wider, more casual mass market of gamers, with an increased focus on representatives from games that are more accessible, whereas the earlier years things felt more niche and, dare I say, hardcore.

This is not a bad thing in my eyes – there is still a strong presence of stuff for fans of deeper, Box box games, large scale miniature games, and complex Eurogames – but it feels more family-friendly and appealing to a fan of lighter games like me. It’s just got bigger to fit it all in.

It’s not just the increased size of the exhibition, the sheer variety of things to do at the Expo was more extensive too. Once again, year on year, a selection of activities was available to suit any gamer’s desires.

This was the first year I went just for the exhibition, as it’s usually the case that I’ve booked on a competitive Organised Play event (No Dice Masters Nationals this year 😢), but there was a tonne of competitive events there to be played in if that’s your jam. For example Fantasy Flight Games, Games Workshop, and the British Historical Society all had a number of events advertised.

One thing I seem to notice every year is that I find the shopping experience a bit disappointing. I pass comment on this every year – I tend not to spot any real bargains, exclusive item or curiosities are rare, and any obscure items I’ve been on the lookout for just don’t seem to be about. I can pretty shop at all the exhibited retailers, for the same price, online.

I know that many peeps like to save up all year and have a Tabletop Gaming splurge at the Expo though, so this is just a personal thing, but I do wish that there was a little more happening stuff on the shopping front. Plus – there’s lots of cool things to at least window shop – like these super-cool (but completely out of my price range, even though it is one of the rare retailers offering convention discounts!) specialist gaming tables…

There was also live shows and seminars available. Only being in attendance over Thursday and Friday this was not of interest to me this time around, but it’s encouraging to see this part of the Games Expo experience grow and, circumstances willing, will be an element I will totally engage with next year.

It was great to see so much space for casual play and demonstrations throughout the hall and in the Hilton. One particular area that caught my eye was a family gaming space with giant sized versions of popular games. 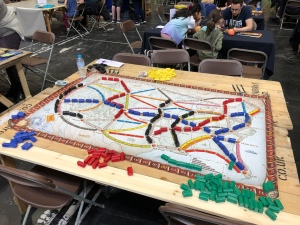 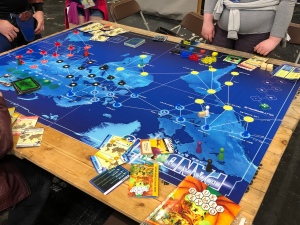 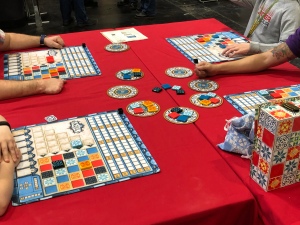 So much fun and, as you can see from the pics, there were loads of families and groups of friends getting involved and using the available games. (Although the family playing Pandemic at the time of the pic appeared to be having a rough time of it when I strolled past them later LOL) I took a lap through the Hilton’s casual play rooms to say ‘hi’ to a couple of friends I’d not seen in a while and it looked as though there was group upon group of board gamers playing a huge selection of different games. I also noticed A LOT of beards. LOL

Even though it was a Friday, and I was there for doors open, it was pretty busy and there was LOTS of hustle and bustle.

Despite the increased space it felt crowded, and it only got busier as the day went on. I dread to think how crazy it got on Saturday.

This wasn’t so much of an issue for me, other than the odd occasion where I felt I was hovering for a while to get into a stand to take my desired peek, but I do have friends that I know who find the crowds a bit stressful.

I read somewhere that overall attendance over the three days was nearly 50,000 people (I suppose this includes those who attended all three days 3x over) which is an incredible feat, and the crowds are an inevitable part of an event of this nature, but could be something that is off putting for some.

There seemed to be quite a few exhibitors who were demonstrating & marketing their upcoming Kickstarter project. I noticed this happening last year, but it seemed even more prevalent this year.

I’m not entirely certain how I feel about this. In principle I’ve absolutely no objection to a game start-up exhibiting at the Expo to promote & demonstrate their game. It is, after all, a hall full of the key demographic they’re looking to develop interest with. This is just good sense. 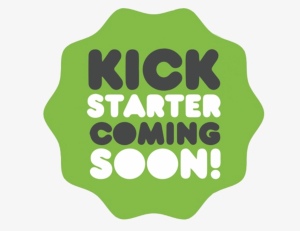 No, what’s confused my feelings about the growing number of Kickstarter projects at the Expo was that once I had a game demo’d, and it tickled my fancy, I was given very loose responses on how I could get my hands on it. “Coming to Kickstarter soon” or “It’ll be on Kickstarter at some point this Winter” were the stock company line answers I got with little more in the way of specifics.

I get that this is a catch 22. The creator relies on the Kickstarter’s success to get the game off the ground, and needs to develop interest to do that, and can’t publish without that upfront financial commitment, but I did find it a little frustrating. For example; One game (which I’ll not name) seemed to be a great fit for me & the kids I would have purchased a copy there & then had the price been right. But now it seems I’m destined to be visiting Kickstarter weekly to see when (and ‘if’ I suppose) it’s up for backing.

That said – it’s encouraging to see so many aspiring game designers in the final stages of making their labour of love a reality. Fun story – the guy at the ‘Canine Kleptomaniacs’ stands was telling me how it is a whole family endeavour, with his sons heavily involved in it with him, and that it’s initial conception came about as a little project to do on a rained out caravan holiday (And one I might try out the next time my family are having a boring time at the Caravan due to miserable weather.) So I will be keeping an eye out on Kickstarter, because despite my niggle on the day (me: “Take my money!” Retailer: “on KickStarter 3 months from now!”) I want to support and ultimately enjoy these games.

There we are then folks – a handful of random thoughts and reflections on the UK Games Expo this year. Did you go? How did you find it? Let me know in the comments below…