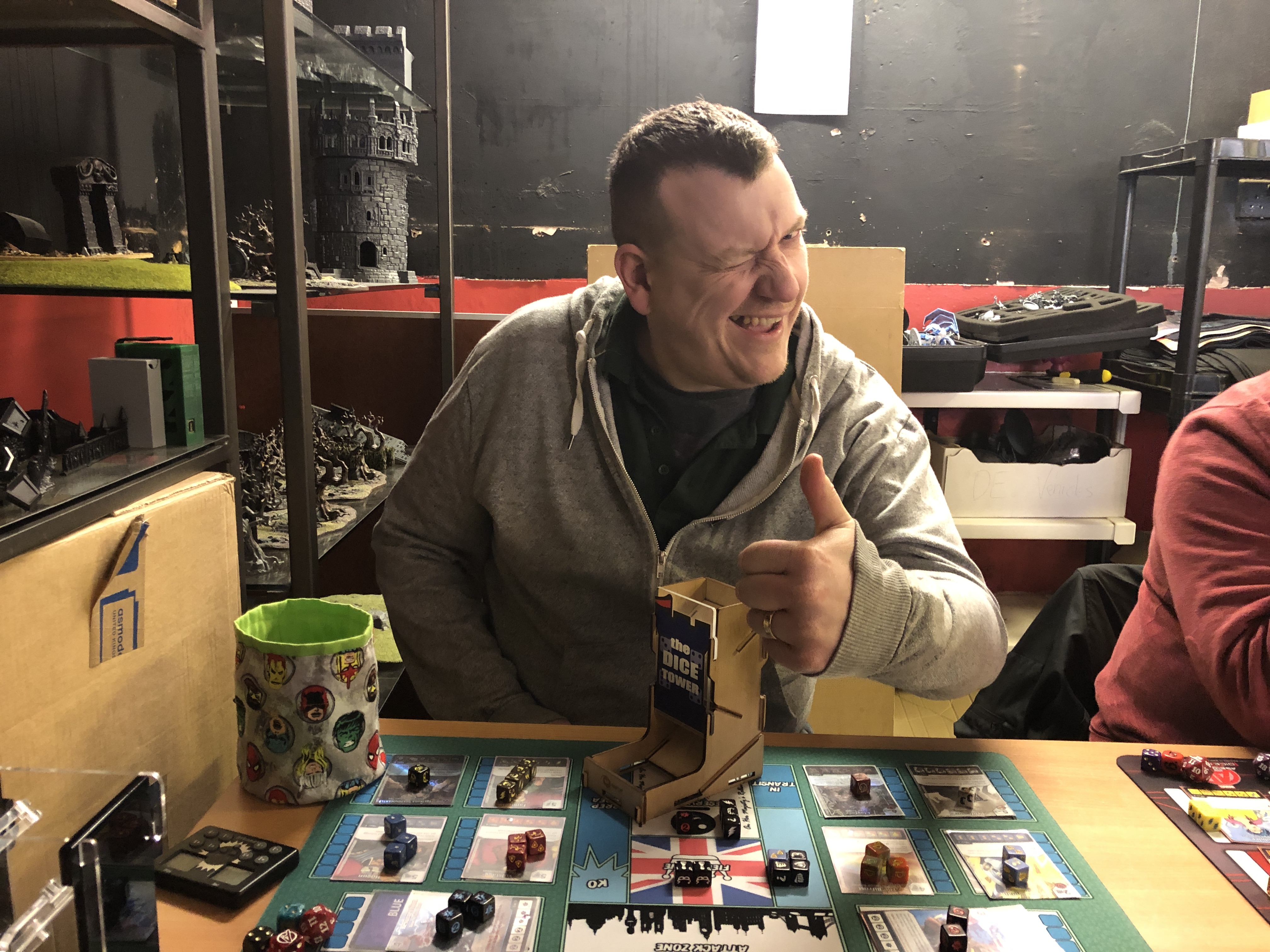 It was the first MoDPDM of the year this weekend. 12 UK players from across the island descended on GTG Games & Hobbies in Stoke-on-Trent to participate in the event.

The format was MoDMGE – “Modern Global Escalation” – teams were to built from the Modern Cards pool, however the cards from the Top 2 Championship teams through 2019 were banned, with the exception of the cards on those teams that have globals. For the complete ban list you can take a look at this page here: MoDPDM@Stoke announcement with MoDMGE ban list.

With 12 players we had enough participants for 4 rounds of Swiss. We don’t do top cuts at MoDPDMs – we believe that everyone should play all day. We kicked things off around 11am-ish once everyone had arrived and I had everyone all set up on the WIN & paired. The atmosphere was great – all the players were hanging out, shooting the breeze, laughing & joking as we milled about and got caught up. We were pleased to see a handful of new faces too, which is always something we pride ourselves on at an MoDPDM.

The team lists are already posted, so if you want to take a peek at the specific cards I mention in my report below then head on over to here: MoDPDM@GTG Games & Hobbies Team Lists, to see the full card names etc

Here are how my rounds went…

First round and I draw an Element Game regular I play all the time LOL.

Seth was running a cool Villain-centric build that relied on ‘Malekith – King of the Dark’ combo’d with ‘Avalanche – Quake in your Boots’ and ‘Kree Captain – Lost Purpose’. Seth’s plan was to use ‘Malekith’ to turn Sidekicks into Villains, clear the field with ‘Avalanche’ and stomp over with some super-pumped ‘Kree Captain’ Dice.

My ‘Poison Ivy’ win con was going to be useless (my opponent only loses life for “non-villains” that get KO’d – Seth’s team was mostly villains) so the focus was going to be ‘Bobby Heenan’ to make Seth lose that precious life. I proceeded as planned – used ‘Becky Lynch’ global T1 to pop a ‘Kree Captain’ in prep, bought a ‘Foetid Bloat Drone’ T2 and Res’d so I’d be rolling the key piece T3. Seth was building his combo too, using ‘Kree Captain’ global also to get his 4 costs bought.

So… about that key piece I’d be rolling T3 – my ‘Foetid Bloat Drone’ had very different ideas. Those dice liked to whiff this game… A LOT. I eventually bought all my Bloat Drone dice and managed to get one in the field just once each game. I rolled Bloat Drones… like… 25 times over the 2 games of the round but just saw energy. It was crazy.

The one time each game the Drone did roll in things went well; Seth’s strategy needed a wide field so I did a good 9 point hit in the first game and 7 in the second, but with Drones not re-rolling in (Seth’s wide field KO’d them each turn) there wasn’t a whole lot I could do.

Both games I staved off some big attacks from Seth with some higher defence blockers and my ‘Static Field’ global but without my own removal to keep his field low while I hoped maybe my Drone would roll. It was futile: it was only a matter of time before Seth got a roll full of Sidekicks and ‘Kree Captain’ dice to use ‘Avalanche’ to clear off even some of my bigger blockers and deliver lethal.

I lost my first round.

Yes folks, it appeared I had travelled all this way to continue playing folk I play against weekly LOL

It was, of course, a pleasure to play f2f with the illustrious Mr England. Andy & I had practised with these teams together so we both had a pretty good handle on what was going on in each other’s. Andy’s low villain count put my ‘Poison Ivy’ back in play, but those Warrior’s Three together in all their glory could definitely run me over.

I stuck to the plan – early ‘Drone’, then ‘Poison Ivy’, then onto ‘Bobby Heenan’ while Andy went about grabbing his ‘Kree Captain’ dice and ‘Bifrost’ to do his cheeky shenanigans move.

Incidentally; we posted one of our practice games with these two teams on our YouTube channel, which you might want to check out: Heenan/Ivy Vs Warriors 3 MoD Game Play vid.

I knew ‘John Cena’ was an early purchase requirement too – I’d been caught out by that sneaky ‘Hogun’ one too many times already and felt the pain of an Intimidated field while 3 super-buffed Norse Gods trampled over to kill me. It didn’t matter that my ‘Mastermind’ takes no damage if he’s not there to block. LOL

I put the pressure on with the Drone and kept Andy’s field low by Deadly-ing them off whenever possible. Andy had ‘Fandrall’ in the field so my Drone kept getting KO’d each turn too, but thankfully I did not see a repeat of my match with Seth and it rolled back in each time.

I did get caught out by Andy pulling a sneaky switcheroo of my Drone with ‘Mutation’ at one point, so it took some effort to keep my Used Pile character free to avoid that little manoeuvre. Thankfully, with a bit of manipulation with ‘Clayface’ global (which we had both brought) I was able to keep the Drone subsequently in the field. I got good and lucky a few times as Andy’s KO’d characters didn’t roll back in on his turn, which meant there was just enough characters in his field for me to do my combo but not so many things were becoming too threatening.

With both Ivy and Heenan I eventually ground Andy down in both games and won my second round.

Next up I was playing Stu, Thursday night a Dice a Fight regular and the Sketch-Art master for the Dice Masters Community.

As always: I stuck to the plan and rushed to my Bloat Drone and Ivy first, setting up my win con ready to further maximise it with ‘Bobby Heenan’ later. Stu did the same, picking up his ‘Grey Hunter’ and ‘Ork Nob’ dice and getting them around super-quick with ‘Yawning Portal’ to drop them in his bag.

The thing with this game was this: Stu did not roll his characters very often, and when he did it only gave him one part of the combo out of sync with the other. This created an odd stalemate for parts of the game because I needed Stu to have characters in the field for my combo to be effective, with my Attack stats too low to effectively take advantage of his small (or even completely clear) field in any significant way.

So… we kinda just needled away at each other a little at a time. Occasionally Stu cleared my field and hit me for a wee tap while I chipped him for a couple of life now and again too. We were going pretty like for like as I recall.

It eventually came down to a pivotal roll for Stu. I had a big field and he had all his pieces rolling in. If he landed them he would have been able to clear my field and make his ‘Ork Nob’ buffed enough to deal a killer blow.

I watched, clenching, as I then saw Stu proceed to roll 2 ‘Ork Nobs’, a ‘Grey Hunter’ and a ‘Seething Corruption’ on double energy. All of them. On energy. He rolls again…

All double energy for a second time.

I felt bad – I knew Stu had been having a rough run of luck with the game of Dice Masters lately and here it was again. Stu remarked “perhaps I should have played an ‘Energize’ team” so despite his “Salty McSalt Face” jibes at himself he was still taking it like a sportsman. ( so much so he won the Fellowship vote) I also didn’t feel so bad that I didn’t finish him off in my go. LOL (you would have done the same – don’t judge) I had won round 3.

My fourth and final round was against Rob, another online community regular and also my fourth all round top bloke of the day.

Rob was running a Control team that was designed to lock his opponent down then use ‘Howard Stark’ and ‘Madame Web’ to give his Control pieces the edge to deal a killer blow. Thankfully, the ‘lose life’ elements of my Ivy/Heenan win con circumvented the ‘Bishop’/‘Hope’ control combo and I’d played with rare ‘Blob’ and ‘Poison Ivy – Red’ enough myself to have a good idea how to play around them.

I started off as always with my ‘Kree Captain’/‘Clayface’ global combo to get an early ‘Foetid Bloat Drone’ while Rob grabbed up one of ‘Poison Ivy’ dice and a ‘Blob’. As his early purchases were Villains I elected to forego my own ‘Poison Ivy’ and snagged a ‘John Cena’ instead. It was obvious that Rob intended to KO my Drone with his Ivy and then lock it out with a Blob, so I went for ‘Cena’ not for the Intimidate control but as an Intimidator himself. It was going to be expensive (3 to field at lvl 3) but I needed to be able to push out ‘Blob’ to get my Drone in the field.

As it transpired it was all academic anyway; at the crucial moment Rob whiffed his ‘Blob’ roll and I managed to buy up and field 2 Drones before ‘Blob’ made himself known again. In fact – I’m not even sure ‘Blob’ rolled at all for a Rob – I believe his ‘Blob’ dice are as cursed as mine apparently.

Rob was now on the back foot and, even though he got his win con of ‘Howard Stark’ and ‘Madame Web’ bought up the odd timing of ‘HowardStark’s’ sacrifice ability and ‘Madame Web’s’ high cost game-text meant my Drone was KO’ing them before they were a threat.

That brought us to the conclusion of the day. Our winner; Carl, had gone 4-0 and taken the top spot (Well done Carl!) and with strength of schedule my 3-1 record placed me 4th, with Alex & Paul coming second & third respectively.

With prizes awarded for first place & second place we got into the business of running the “True Mister Six Mystery Prize Raffle” and dishing out the lovely swag from my Prize Box. Every game won wins a raffle ticket so everyone but Andy got some fun little Superhero items from my box of joy.

Incidentally – Andy took the coveted Ministry of Dice wooden spoon, so the prestigious membership to that particular club got an extraordinary boost at this particular MoDPDM. An even more exclusive selection of members than it already was.

I’d like to thank everyone who came out to play – it was a super fun event and it was great to hang out with you all. Looking forward to seeing you at one of the OBW 2’s and the Games Expo! Also – thanks to Ed & John over at GTG Games & Hobbies for taking good care of us and offering their store for the day – we’ll definitely be looking at making Stoke a venue of choice for future MoDPDMs.

That’s all for now – thanks for reading 🙂