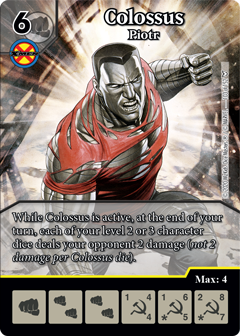 Yes folks, that’s right, you’ve read the title correct – there’s been even more beautiful, beautiful spoilers since the last spoiler review to sit back and consider, some of which I am crazy excited for.

If you’re new around these parts and not read a BritRollerSix spoiler review before then all you really need to know going in is that I like to document my “first look instincts” and jot down my hot take, initial thoughts. This is not all of the spoiled cards but my stand-outs and curiosities from what we’ve seen since we wrote about the Mister Sinister spoilers from approx. 2 weeks a go.

Before we start – here are the links to the original sources of the spoilers, each with their own takes/thoughts on the cards. A big shout out and “Thank you” to Jourdo, Steve and the CRGR guys for sharing these with us, and specifically for providing me with the source pictures.

Please make the effort to visit their sites & channels and give them a loving like – all these guys are wonderful, collegiate contributors to the Dice Masters community and you should check them out.

Right then… on to my hot takes…

Probably the card I am MOST excited for, and have been eagerly awaiting the DMArmada reveal so I can talk about it!

This guy is a (slightly amended) functional re-print of a classic card from the Avengers Vs X-Men set (Another Colossus, no less) and was one of my toppermost of the poppermost win conditions for some time. I’ve got a real fondest for the original and will DEFINITELY be playing again with this guy.

The thing I wanted to point out, and explain why he’s so attractive to me: it is the PERFECT win condition for tentative Control players like me. Every minute you’re using Control you are not working towards a win, but with this guy you can happily build your Control forces up knowing that you can turn them into an offensive advantage too. Buying an ‘Angela -Odinsdottir’, ‘Pip the Troll – Prince Gofern’ or a ‘Black Widow – Agent’ is not so much of a diversion away when you know that when Colossus arrives each one of them is going to be a 2 point hit every turn.

Of course – you’re going to need them at level 2 or higher, so a solution to spin them up is a must. I’m a fan of ‘Zatanna – Being of Magic’ (she served me very well at Euros in my OG Colossus build) to get them spun up, but there’s also cards like the Basic Action ‘Power Almighty’ and a ‘Energy Field’ to spin up characters too.

Oh, and don’t forget he’s an X-Men affiliated character – so a lovely combo buddy for that most favourite of X-Men characters: ‘Hope – Pluripotent Echopraxia’. Get them both out and watch your opponent’s life total fly down to zero.

Belting artwork too – love a dynamic shot like this. For the fans out there this pic is from a textless variant cover on one of the Avengers Vs X-Men: Consequences books.

Next stand out from the recent Dark Phoenix Saga spoilers is a Basic Action with an intriguing Global.

There is a wealth of opportunity with a global that can give characters a shared affiliation on demand, particularly one that creates X-Men characters, which is arguably one of the most powerful affiliations in the game.

I’ve got a bazillion ideas rattling around in my mind at the moment, a few that I need to think through and process, but I’m circling around some ideas with ‘Rachel Summers – Prestige’ and ‘Kitty Pryde – Professor Xavier is a Jerk!’ that might be nice.

Despite the global the card is a risk – the core game text, with the global, can become a liability as you had your opponent the tools to deal your characters 3 damage. Be equipped to soak it up or avoid it if running the BAC.

Toad – Journey into Misery /Mystique – She Walks Among Us

I’m doing two cards in one go here because I think they both represent something that I’m really interested in.

I’m always on the lookout for Affiliation synergies because I’m a massive fan of playing affiliated teams in this game and these two cards (among others) really give a boost to the ranks of the Brotherhood of Evil Mutants with fun team based game-texts.

It’s no secret that the Single Affiliation format is a long standing favourite for our MoDPDM Dice Master tournaments over here, but we can find that the same affiliations come around a lot so it will be fun to see if this new blood in the Brotherhood of Evil Mutants raises them up a bit and gives them more of a fighting chance.

And this pair are potent stuff. We’ve already seen the impact the spin down mechanic is having on the meta with Infinity Gauntlet cards carrying those texts, and some manipulation of the Prep area has a place in a world of Becky Lynch globals.

Time will tell, but I know it’s going to be fun playing around with it.

DM-North revealed the whole suite of Wolverine rarities on their stream, but the one that caught my eye of the batch was this one.

There’s lots of fun Awaken abilities knocking around and Wolverine’s text would make him an interesting addition to the mix. Creating a Deadly Sidekick at the same time as firing off another Awaken effect is one to play around with for sure.

I’m thinking he might be a particularly interesting fit with any Awaken abilities you’re planning on firing off in your opponent’s turn. I’m thinking ‘The Collector – Driven by Purpose’ to fire off, get ‘Wolverine’ auto-spun while on burst, get your Collector’d in die and a Deadly Sidekick for blocking. Could be interesting.

The stats are pretty offensive for a 4 cost die too, so he can be a bit of muscle ready to use in addition to his game-text as well. The fielding costs are painful but there’s ways & means of dealing with that.

AND there’s a lot of interesting “if Wolverine in the field” game texts knocking around in the set too, so he’s got the added value of that little twist too. I like ‘Iceman – Frozen Fists of Fury’ for a nice bit of extra removal, for examples. (Want to see him? Go check out our “Dice Masters Spoilers from Unreleased sets” page for card images of Iceman, and many others)

All in all, probably not competitive, but something to have a nice experiment with.

There we are folks – there’s a few “first look” takes on the new spoilers. There’s so many more, so head on over to our gallery and take the time to check out the full reveals from the original sources listed at the top of the blog post. Thanks once again to the guys for sharing and giving me permission to use their exclusives – you’re the best!

Let me know in the comments below – what’s your stand out spoiler? Not just from this batch but from all of the Dice Masters Dark Phoenix Saga we’ve seen so far? Anything you’re not looking forward to? Share your thoughts…